Oops! Something went wrong while submitting the form. Please try again.
home
ca.rs
- For Sale
- sold
- all
- car sourcing
stories
merchandise
About
- what we do
- Sports Purpose
- who we are
- our cars
Contact
"We have recently witnessed several of the best examples discreetly changing hands for values last seen in the boom years of 2015/16..."

The last twelve months have been surprisingly healthy for the classic car market. Despite the adverse economic environment and the restrictions on travel, not to mention the difficulties in physically inspecting or testing anything, plenty of cars have found a way of changing hands. In the UK as lockdown restrictions start to lift and retail premises open up, it is clear that an increasing number of buyers are chasing a shrinking amount of stock.

Within the Porsche world, there has been a lot of buzz around more modern classics such as the 964 RS, 997 GT3 and Carrera GT.  Less obvious perhaps has been a resurgence of interest in Porsche’s meisterwerk, the 1973 2.7 Carrera RS. We have recently witnessed several of the best examples discreetly changing hands for values last seen in the boom years of 2015 / 16 and while early 911s in general are solid they have not yet made it back to the market peak. That means that an RS Touring is now three times the value of an equivalent 2.4S from the same year. It is undeniably a great car but that is now a very sizeable premium to the rest of Porsche’s contemporary catalogue. Is the 2.7 RS really that special?

In answering this question, the comparison with the 2.4S is an interesting one to make. The 2.7 RS has the reputation of being a light weight, exotic, competition focused one-off. As the legend goes, it was created purely to act as the basis for a racing car and not with any commercial motivation in mind. That makes it sound radically different from the car that went before it, but was it?

In 1972 the 911 was already a highly successful car in motor sport but with the competition hotting up Porsche needed to stay ahead of the game. The FIA Group 4 rules that governed top tier GT racing at the time allowed engines to be bored out but only to the capacity limit of the car’s class. That meant the 1972 2.4S could be bored out to the 2.5 litre class limit but no further. The first thing Porsche needed for their 1973 model line-up was a 911 with an engine bigger than 2.5 litres.

As a result, the most significant change that was made to the range topping car was to increase the engine bore from 84mm to 90mm. This was not a trivial task to perform on an engine originally conceived as a 2.0 litre and required the adoption of a new coating technology for the cylinder linings. The result was a 15% increase in capacity but otherwise the engine was mechanically virtually identical to the 2.4, including the compression ratio, valve sizes and cam timing.

The other pressing racing priority was to improve the car’s road-holding and it had become obvious that the secret with the rear-engined 911 was to put much wider tyres on the back than the front. Again, the GT rules allowed the use of wider wheels but only as long as they remained covered by the wheel arches, which themselves could only be extended by a certain degree. Therefore, the second thing the new road car needed was widened rear wheel arches.

Accordingly, Porsche re-shaped the rear wings which allowed the use of wider 7” back wheels and a slightly increased track. The anti-roll bars were also stiffened however that was as far as changes to the running gear went and the suspension and brakes remained largely unaltered. Porsche did take some measures to lighten the car by using thin gauge metal panels and lightweight glass however their importance can be overstated as they probably saved less than 20kg overall.

These rather modest sounding upgrades gave Porsche the needed room for manoeuvre and enabled them to produce a racing version of the 911 for 1973 that was significantly quicker than the previous season’s car. So much so that the RSR, as it became known, won several of the endurance racing classics outright that year, including the Daytona 24 Hours and the Targa Florio. These racing successes certainly added more cachet to the 2.7 RS than had been the case with earlier 911s.

This leads me to another major difference between the 2.7 RS and 2.4 S which is how the car was sold.

Ever since Porsche started homologating the 911 for racing it had been creative with the way it defined the standard specification of the road car in order to have it recorded at the minimum possible weight. This was important because the racing versions were not allowed to weigh less than this official figure. The trick they had used before was to bring a car to market with the most basic specification possible (known as Grundtyp in German) and then offer customers an option package which converted it into a practical road-going proposition for a nominal cost. For the preceding 911S this was done in such a way that the customer had to opt out of the upgrade and consequently almost all cars were delivered fully trimmed.

However, the FIA had started to wise up to this chicanery and Porsche decided that for 1973 a more overt offering of the basic car would be prudent. They decided to sell the car to the public in an aggressively stripped out form with even the anti-roll bars removed. These cars have subsequently become known as RSH or “RS Homologation” and were listed at 960 kg wet. It was something of a pretence, but every one of the first 500 2.7 RS were first completed as an RSH and driven to the Stuttgart weighbridge to be officially recorded. Of course, Porsche anticipated that almost nobody would actually want their 2.7 RS delivered in such a Spartan form, so customers were given the choice of two option packages. 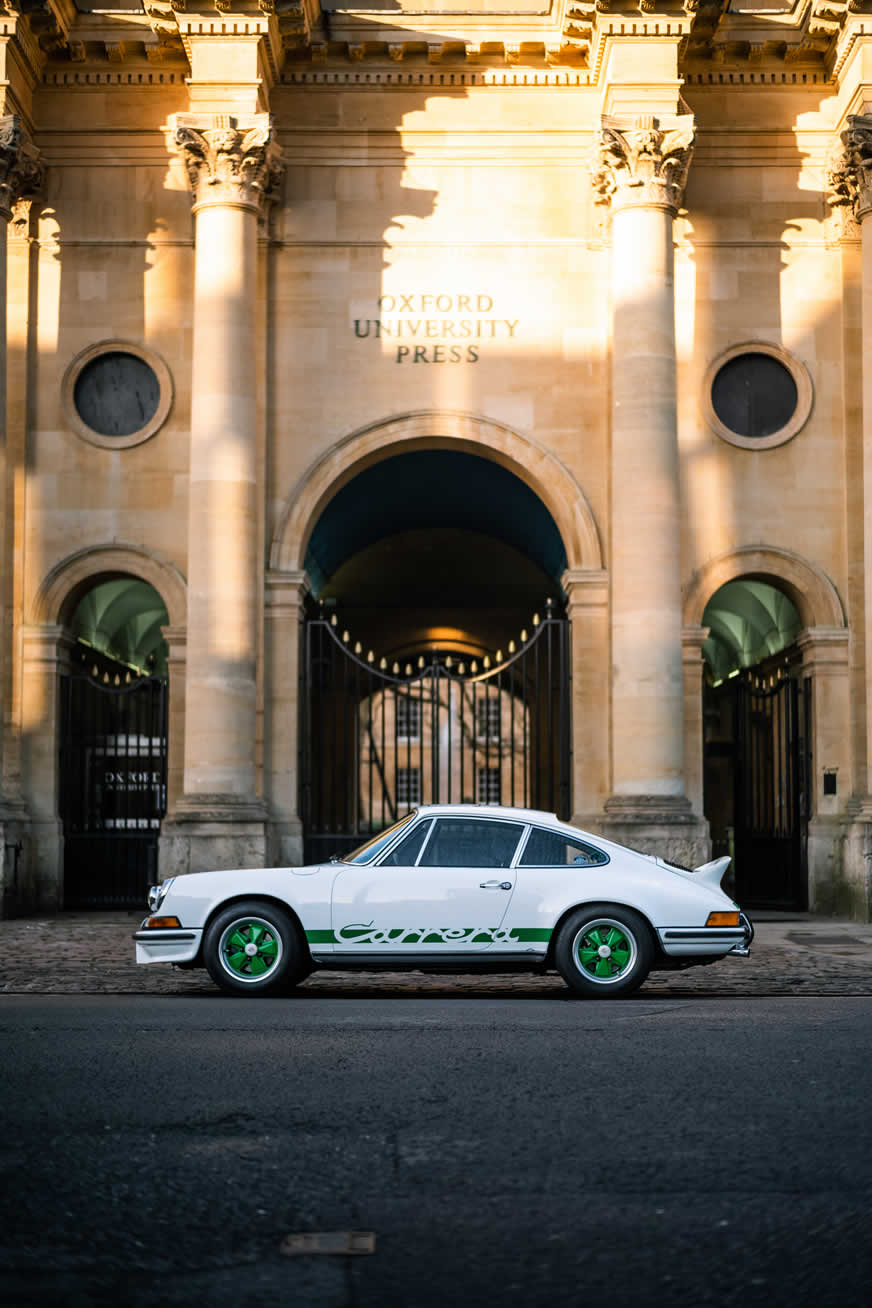 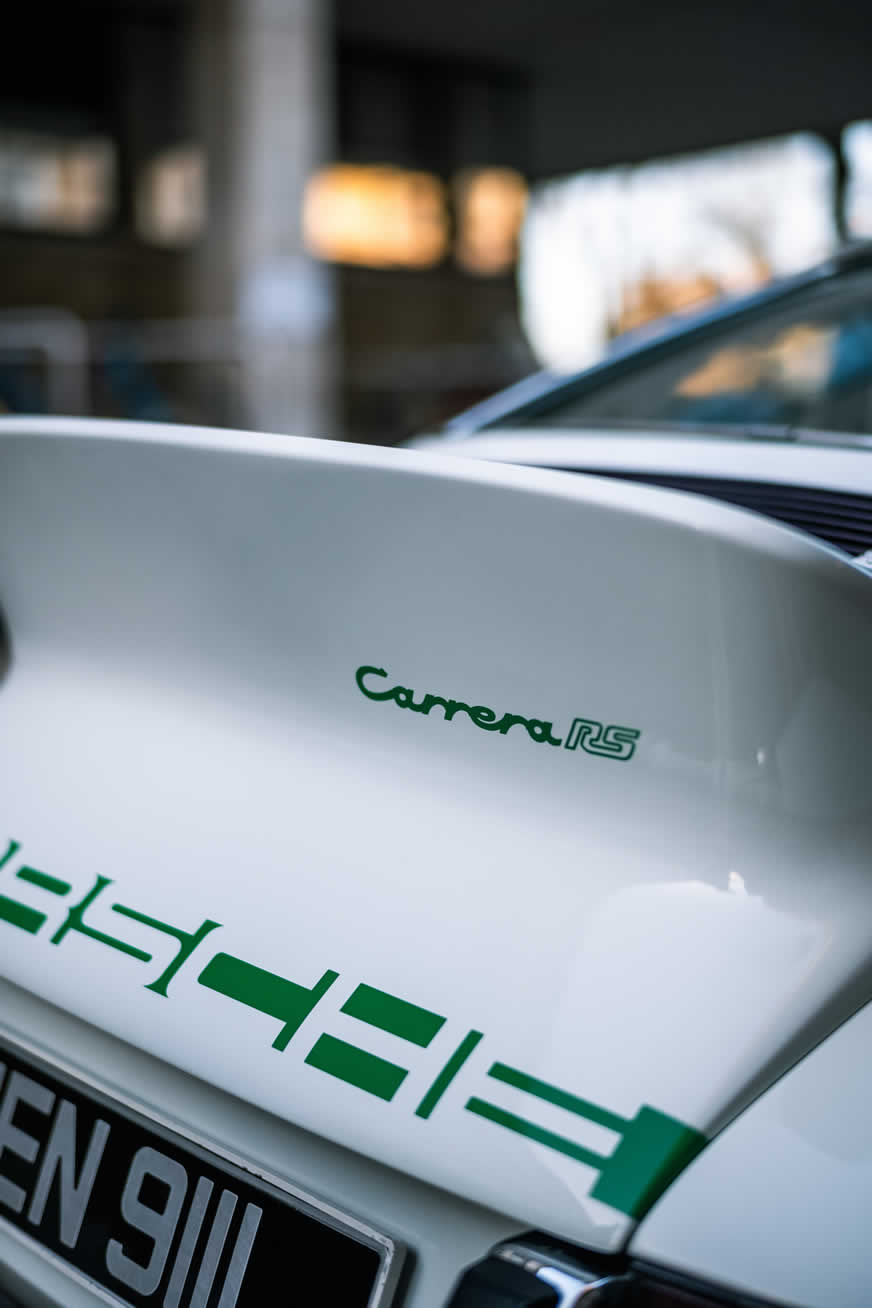 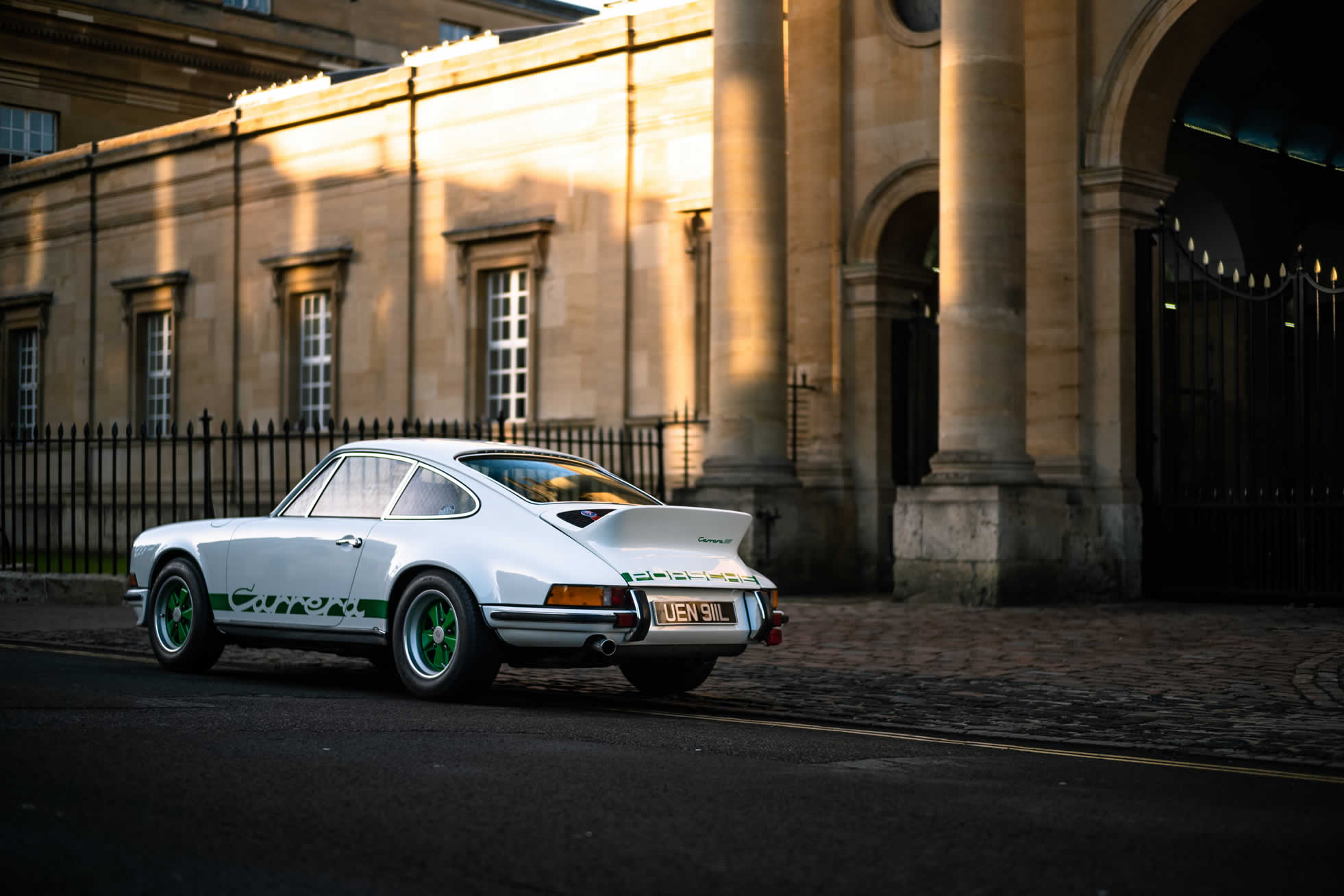 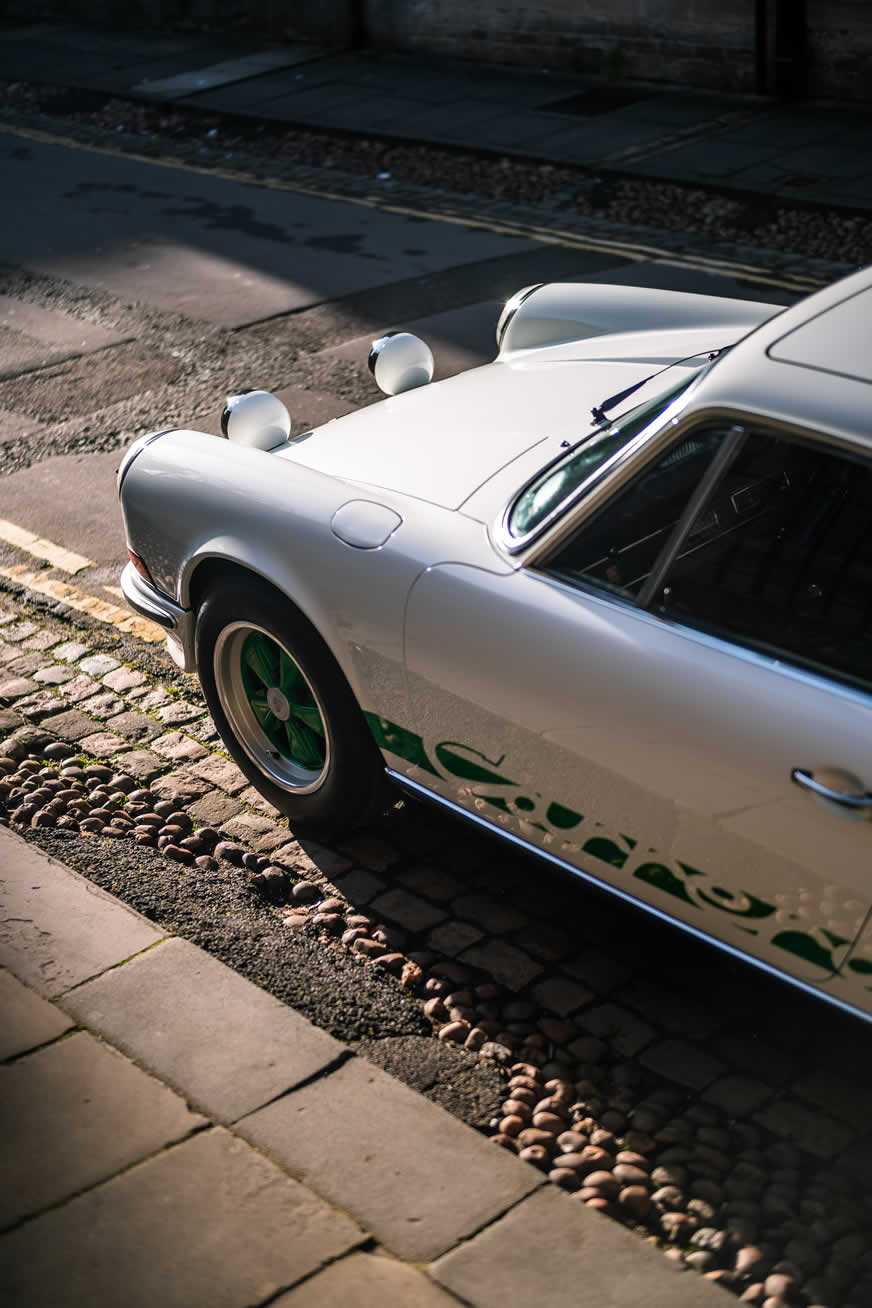 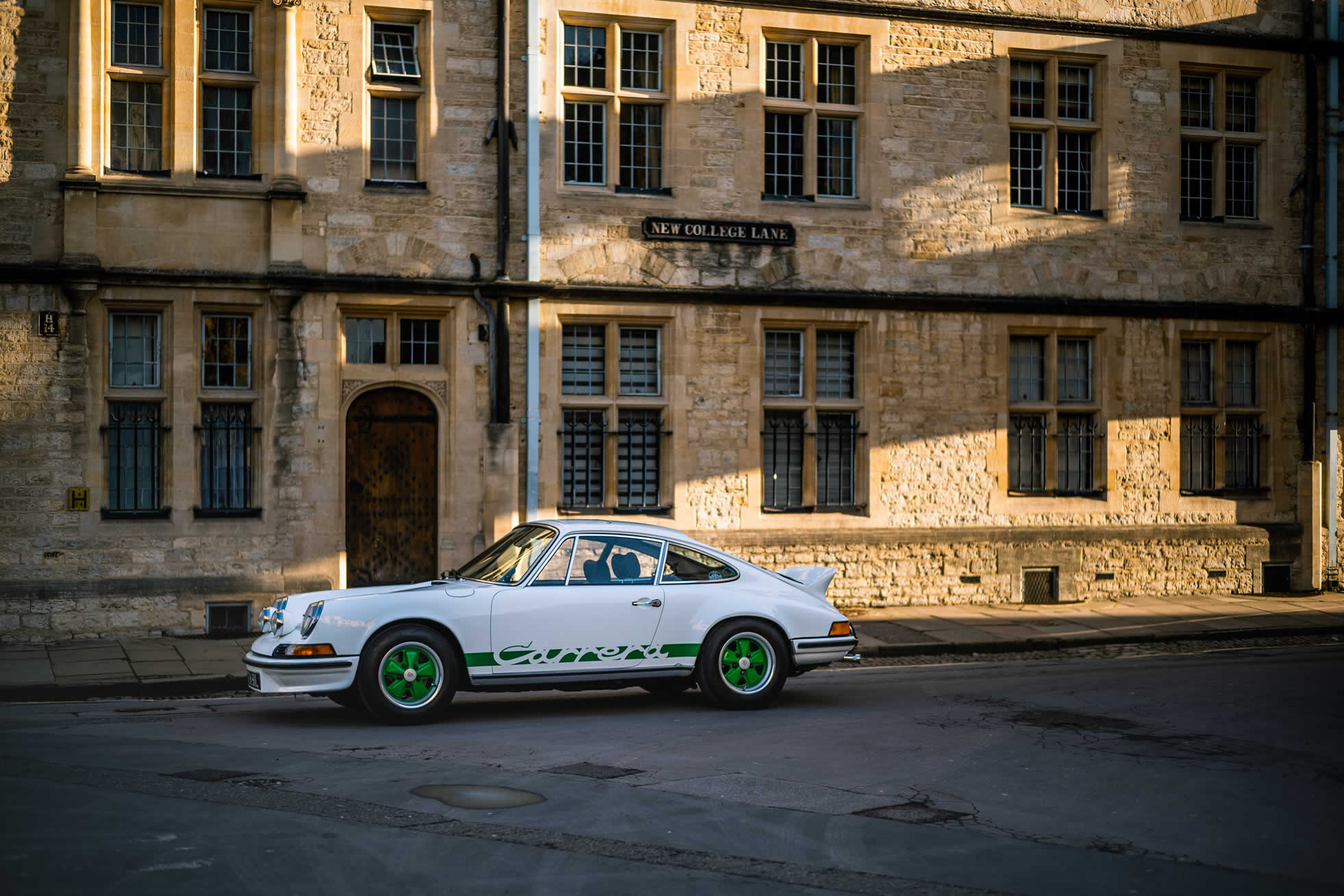 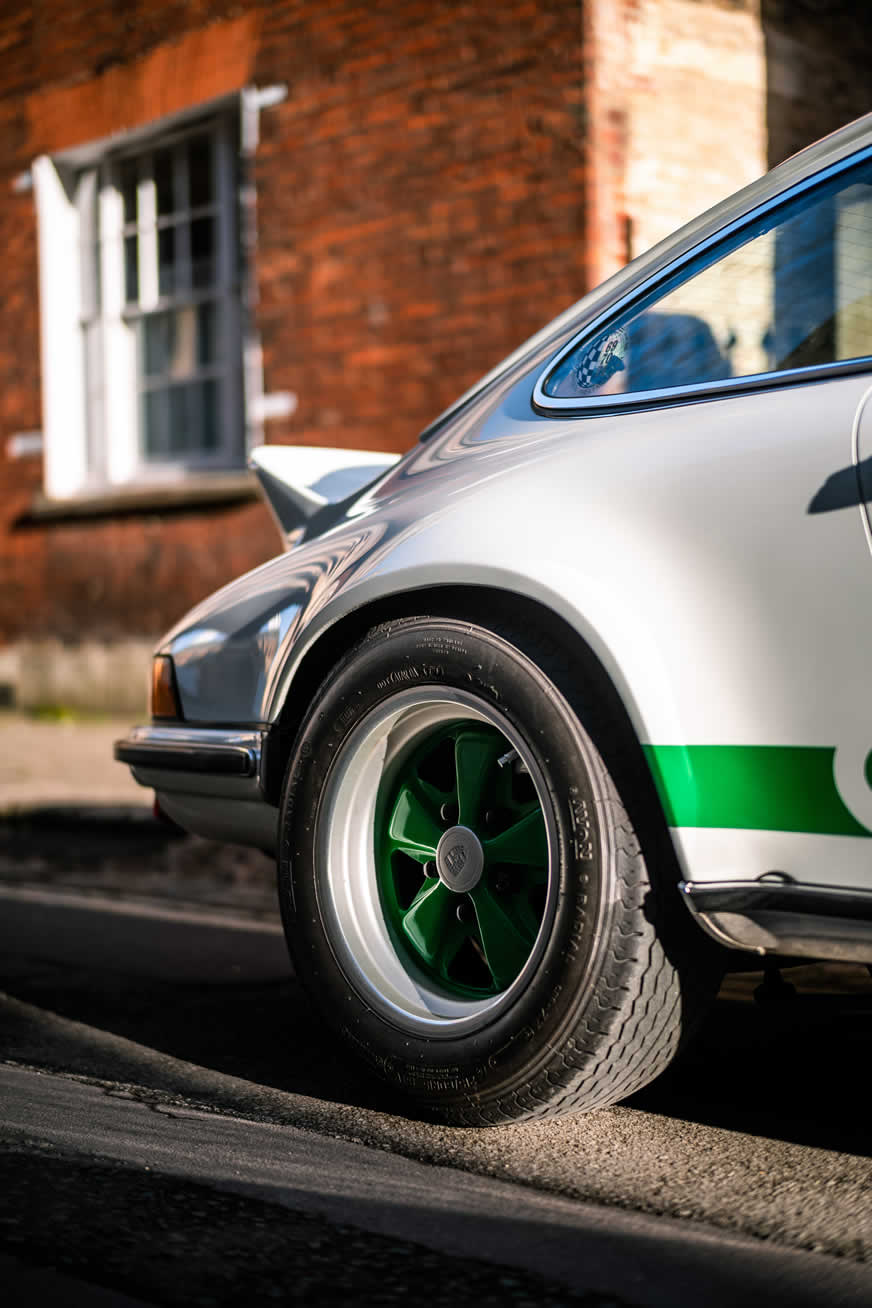 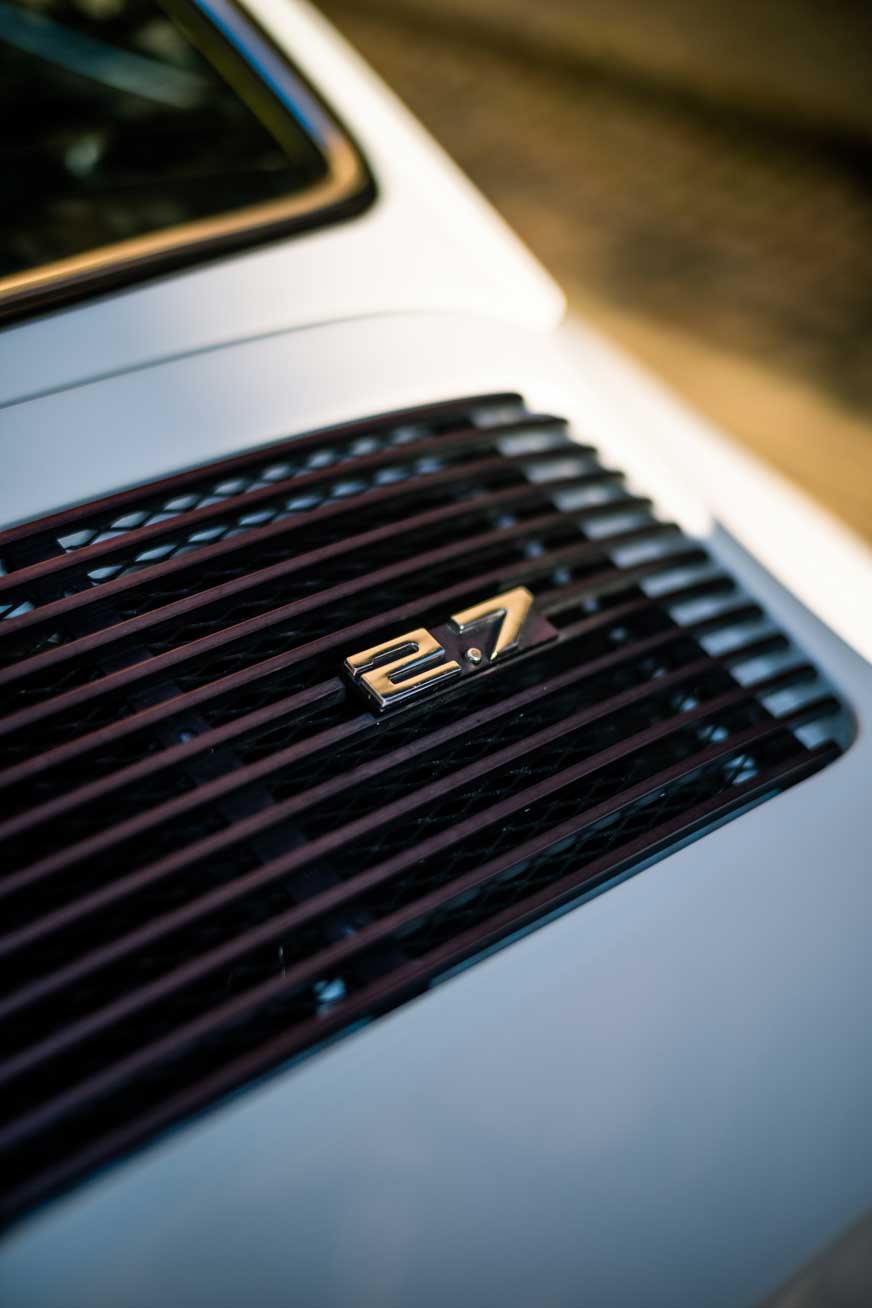 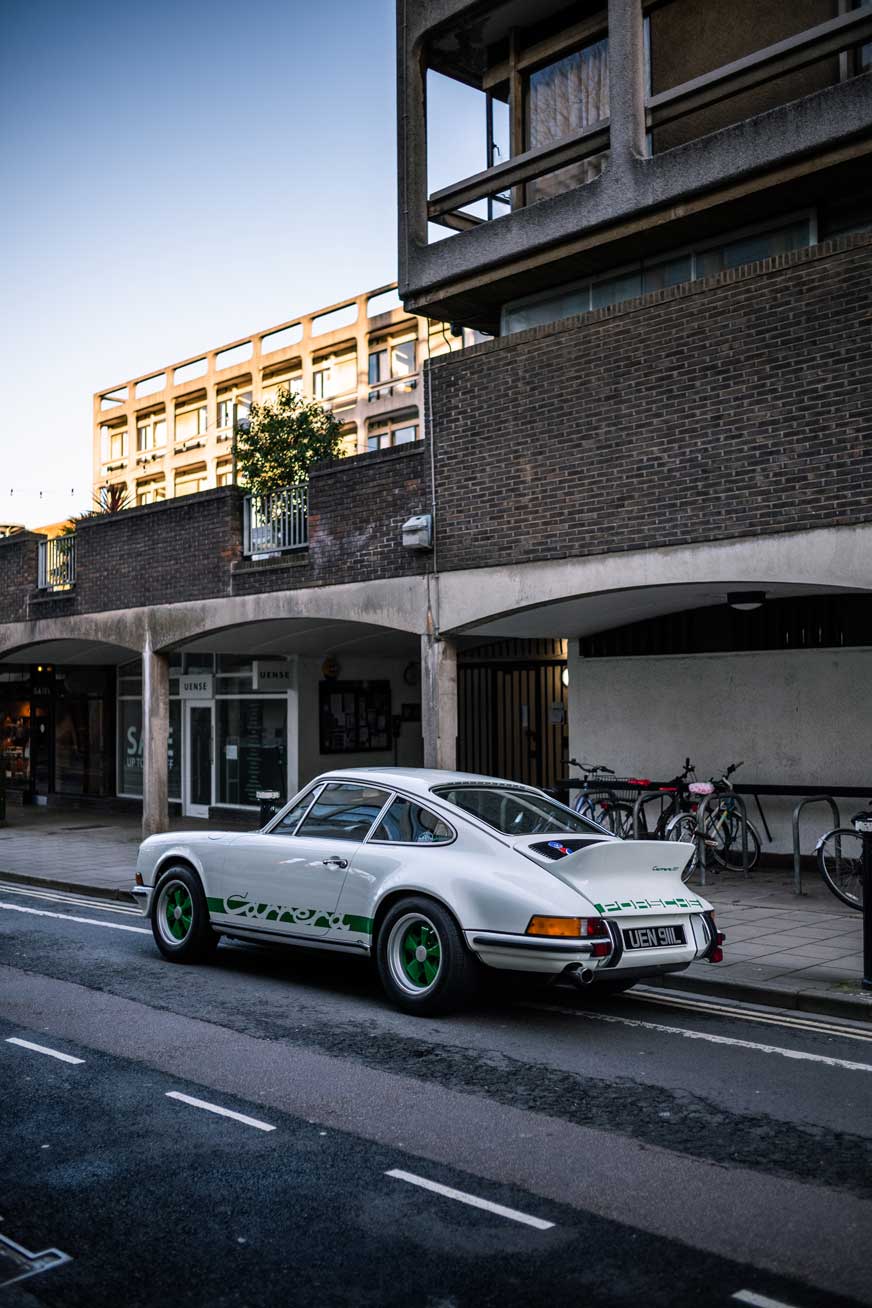 The M471 or “Sport” option added back the anti-roll bars and some proper wheels, but not much else, taking the weight up to 975kg. The M472 or “Touring” option installed all of the trim and creature comforts of the 2.4 S at the penalty of an all-in weight of 1,075kg (roughly the same as the 2.4 S itself). When the RSH cars returned from the weighbridge the factory then converted them to whichever of these options the customer had selected.

Although this sales approach was born out of rule book necessity it was the first time Porsche engaged their mainstream customer base with a pitch for such a competition-focused machine. The marketing department were certainly nervous, and the car was priced keenly to maximise its chances. Porsche needn’t have worried and within days of the car’s launch at the Paris motor show the first 500 cars were accounted for.

Ultimately 1,508 road-going 2.7 RS would be made of which 87% were M472 and 13% were M471, demonstrating that few customers actually intended to use their cars competitively. However, owners clearly were attracted by the close association with Porsche’s racing programme. The irony is that road-going Porsches have always had this connection as racing has been an integral part of the company’s R&D from the beginning.

So, coming back to my comparison with the 2.4 S, the differences seem to come down to slightly more power, a bit more grip, and the “halo” effect of association with a successful racing programme. However as with many things in life, an accumulation of marginal gains can end up making a significant difference and that is certainly manifest in the way an RS drives.

The bored-out engine only gained 10% more power, but its torque went up 20% and its addictively free revving nature remained intact. That gives the RS a significant amount of mid-range shove missing from the earlier S. Whereas overtaking in an S requires a bit of thought, in an RS you just plant your foot and go. Combine this with a slightly stiffer chassis together with better rear end grip and you end up with a car that seems perfectly matched to fast driving on challenging roads.

In 1973 the RS must have seemed ballistically fast given what else it was sharing the road with. Today there are plenty of much quicker cars however I would bet there are few that would reward the driver as much. That is because the RS has just the right mix of power, weight and grip for the driving opportunities that most of us can expect to encounter. You can fully exploit the whole of the car without risking a spell in prison. And of course, it has all the attributes of an early 911 that Porsche enthusiasts have come to love.

Porsche have re-used the RS formula several times since and while these have also been class leading cars of their day many still rate the 2.7 RS as the best 911 Porsche ever made. It has become the prototypal 911 and if you only had room for one Porsche in your garage that would be the one that many would choose. With a reputation like that and a small production run, that starts to explain why people are prepared to pay so much for them.

Having said all that, the 2.7 RS does have one significant issue. The fact that it isn’t that different to other 911s of the same vintage means that it is straightforward to replicate. That’s good news if you can’t afford a real one as it is possible to reproduce the driving experience for a fraction of the cost. However, it is also an invitation to the unscrupulous and over time the market has become infected with forgeries of varying degrees of accuracy. Bad ones are easy to spot but the best can fool even an experienced eye. In recent years the market has wised up and it is only cars with unshakeable provenance that command top money.

So where does this leave me? The rational side of my brain would argue that buying a 2.7 RS makes no sense when you could have three first rate early 911s for the same money. However, emotion usually triumphs logic and I am no exception. Last month my old RS, an outstanding car that I’d owned for a decade, popped up for sale. It took one evening of deliberation for me to decide I had to have it back. Unfortunately, somebody else didn’t even need to think about it and by the time I called the following morning it had gone. At least the episode helped me realise the 2.7 RS definitely is a very special car.