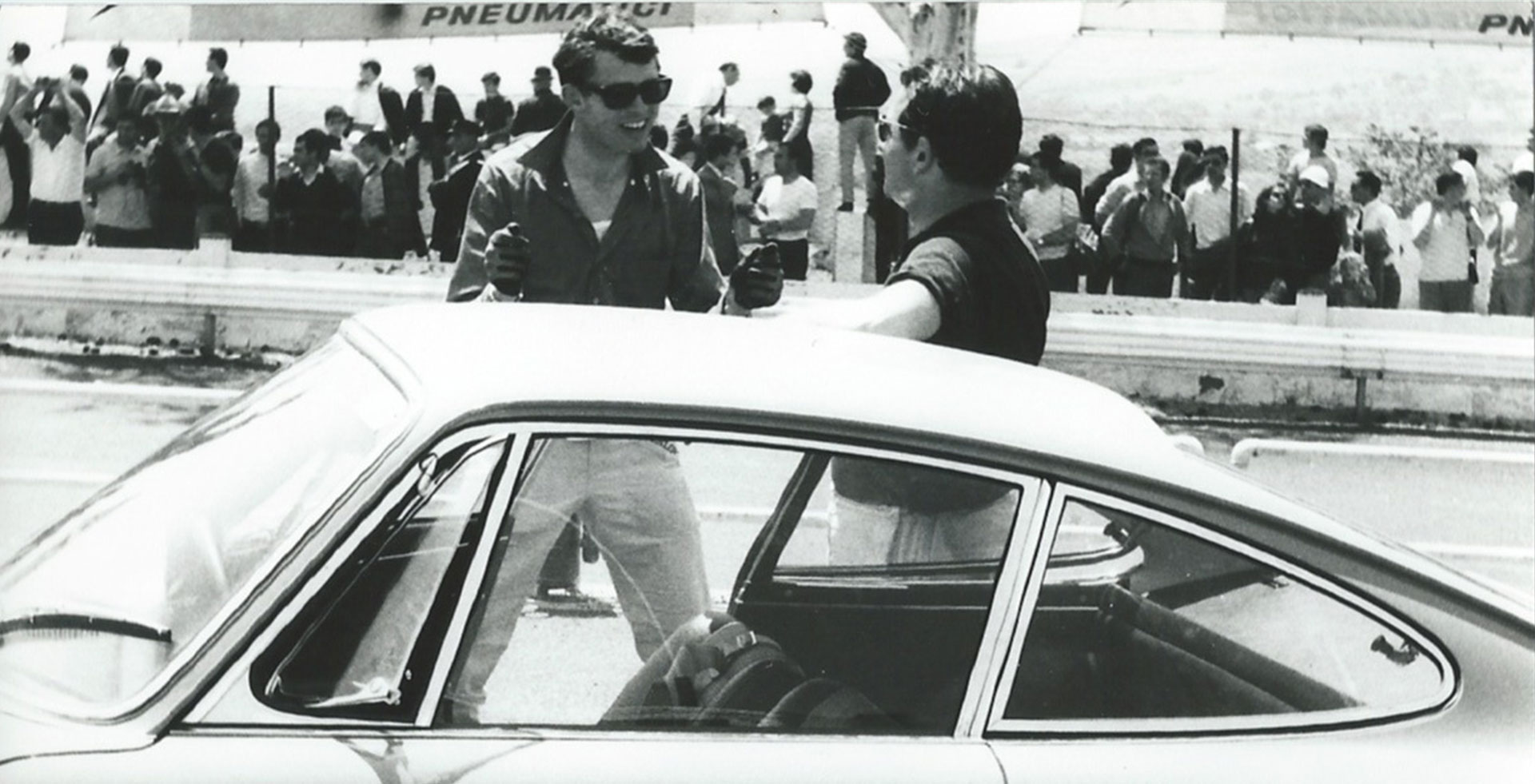 The internet has transformed how we go about shopping for many things but one of the last retail experiences to resist this wind of change has been buying a car. Not any more. We are now being encouraged to purchase our next daily driver without leaving our armchairs or even picking up a phone to speak to someone. Just select the model you want and choose a colour. Press “Buy Now” and wait for it to be delivered to your door. We seem to be rapidly getting used to the instant gratification that Jeff Bezos and his friends seek to provide. But are we losing something with the “have it delivered tomorrow” consumer experience?

This was brought home to me recently when I was lucky enough to spend an afternoon with Rob Mackie, who related to me the story of buying one of the first Porsche 911s delivered to the UK. Not just any 911 mind, but a Sports Purpose car in which he was destined to compete at the 1967 Targa Florio. At the time Rob, then 26 years old, worked for Dan Margulies, the famous Knightsbridge vintage car dealer. Dan was a keen amateur racer and Rob, with several years of European rallying experience under his belt, was his hot-shoe co-driver.

In 1966 Dan bought a race-worn Ferrari 250 GTO from an Italian with the intention of running it at the Targa Florio. Rob raced it for him at a couple of UK events that year but struggled with the driving position which didn’t suit his six-foot frame. Despite its performance he was not looking forward to the prospect of several hours at the helm of the big Ferrari on something as physically demanding as the Sicilian course. Fate intervened when a North London accountant made a handsome offer for the GTO, and Rob was somewhat relieved when Dan decided to look for something more suited to the Madonie.

Dan had previously bought and sold a few Porsche 356s but had no experience of the “new six cylinder car” as the 911 was then referred to. Rob doesn’t remember anyone racing a 911 in the UK until the following year when Vic Elford famously won the Brands Hatch rally cross in a showroom demonstrator live on TV. He thinks Dan got the idea from a Swiss rally driver that he knew and a meeting was arranged to test drive a 911S at AFN, the UK importer, at their premises in Isleworth. They were each allowed to drive the car but only under the strict supervision of the sales manager. Rob tried to get some impression of what it would be like to race, only to be hastily told off by his nervous passenger. A request to test the car at Silverstone was rejected out of hand by AFN’s proprietor, John Aldington, however, the drive through suburban London was enough to convince Rob that the 911 would go really well on the twisty Targa course.

The 911 must have created quite an impression because Dan placed an order for a Bahama Yellow 911S that day, however that still left the question of how best to specify the car and set it up for racing. It was apparent that AFN had no idea what was available from Porsche or indeed what was legal under the racing regulations. Perhaps this was understandable as Porsche had yet to advise their dealers of the racing potential of what would become the most successful car in motorsport. So a few weeks later Dan put Rob on a plane to Stuttgart to make enquiries directly at the factory.

Rob recalls arriving from the airport by taxi during the afternoon at the new car delivery department opposite the main factory gates. He hadn’t been told who to see but the receptionist summoned the head of department, Gunnar Rohgert, to welcome him. After a cordial chat over a cup of coffee he told Rob that they’d booked him into a local B&B. It was on Rohgert’s way home so he dropped Rob off and picked him up again on his way to work the following morning. It was an early start as all Porsche employees began the working day at the same time 7:12am – so chosen because the clock on the day the factory opened had been 12 minutes late. 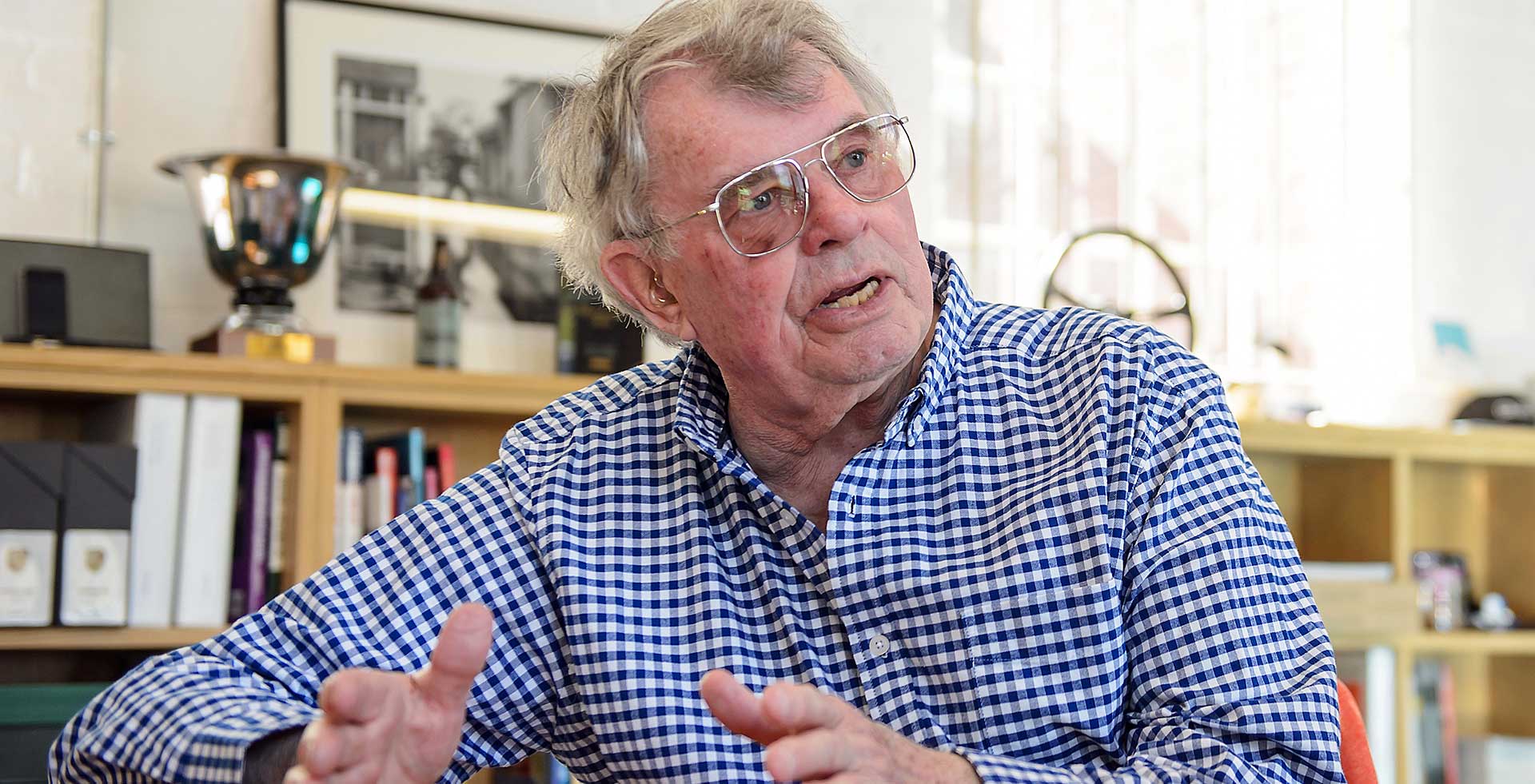 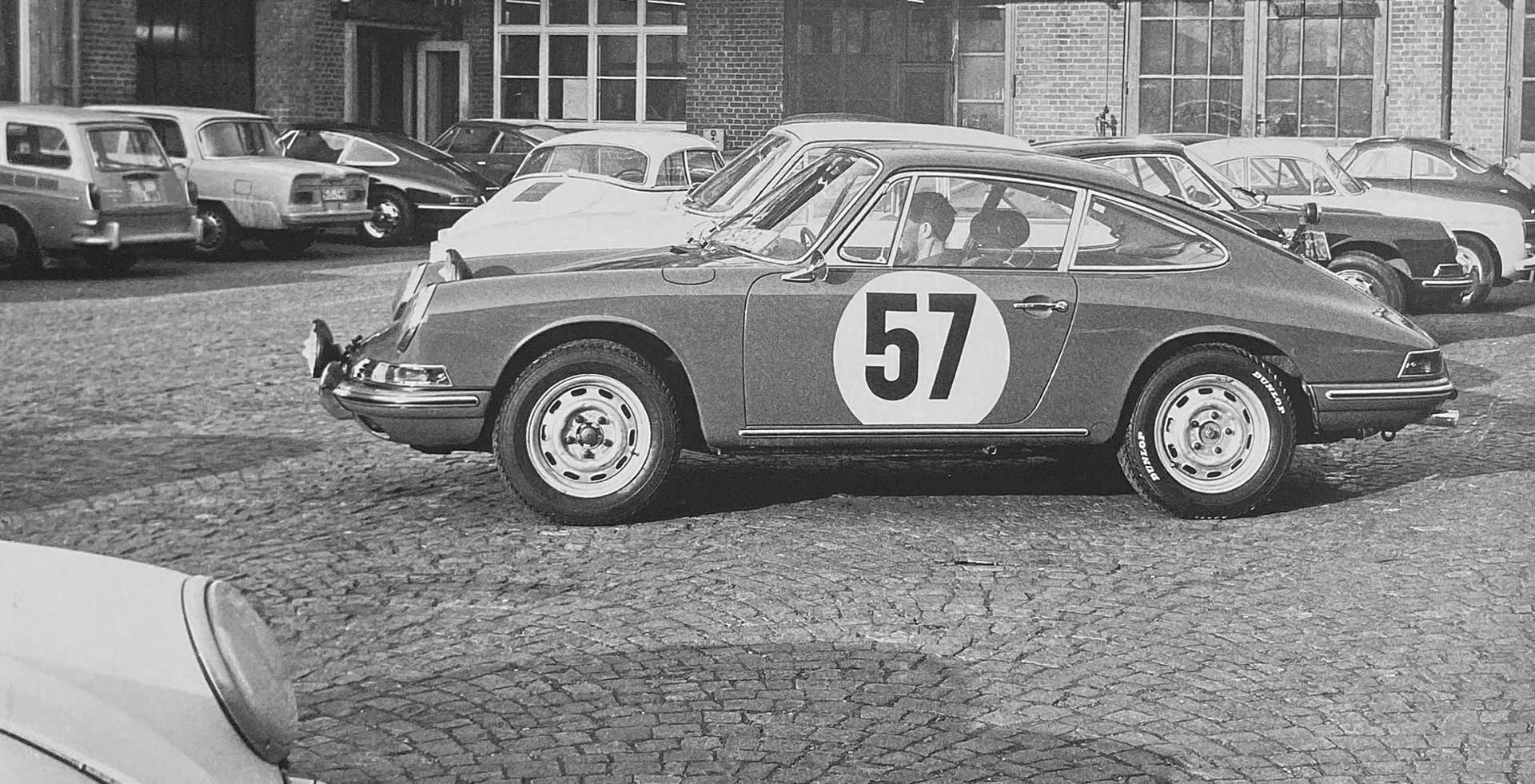 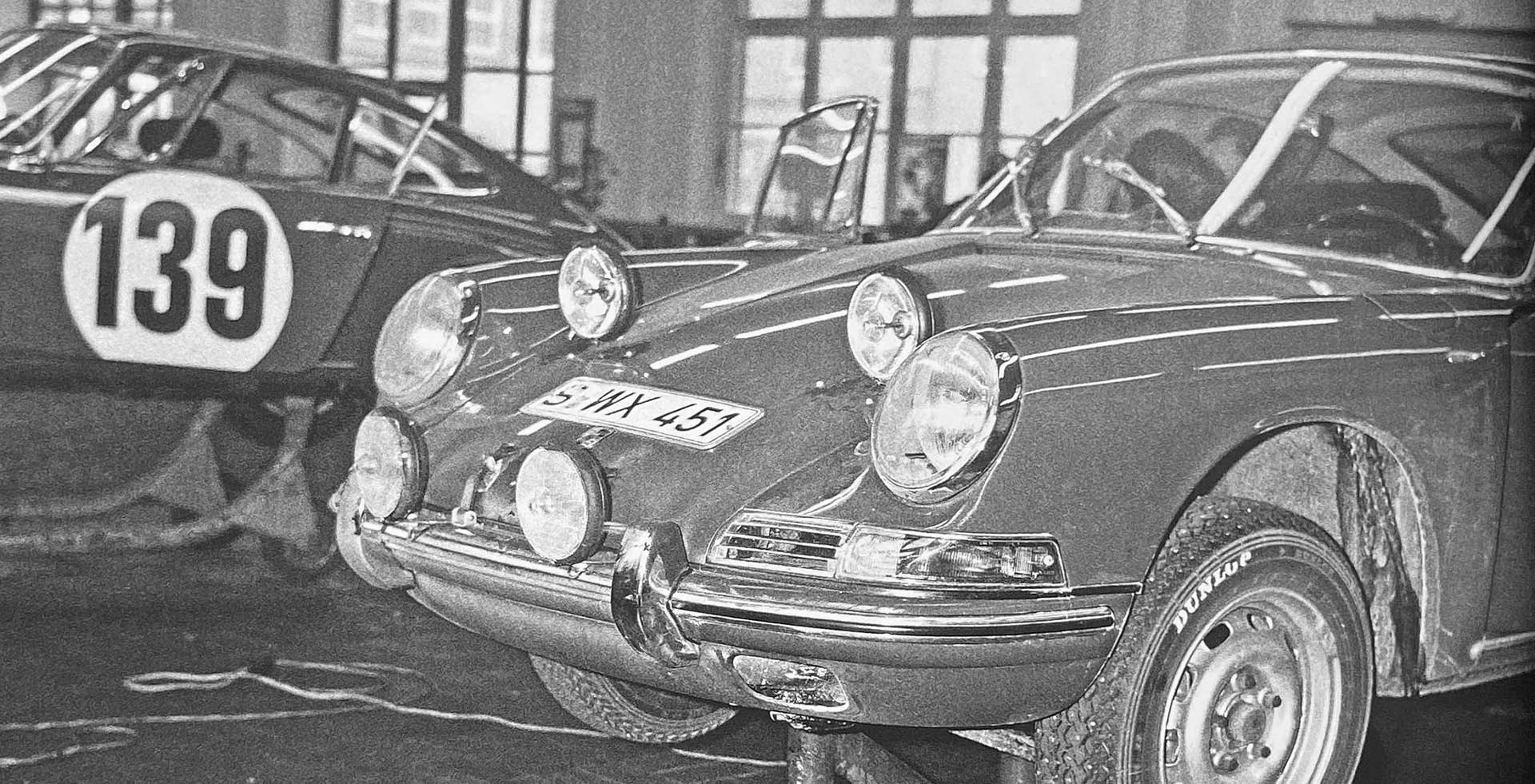 Rohgert had received the basic order paperwork from AFN but took Rob to the Repair Department to meet the man in charge, introduced to him as Herr Brett. German formality meant that Rob never found out his first name but he remembers him as being a very warm and friendly man. Despite its title, the main function of the Repair Department was not to repair damaged cars but to modify new cars to special customer order. In the 1980s it would be renamed Porsche Sonderwunsch, which translates as “Special Wishes”, and this later evolved into what we now know as Porsche Exclusiv Manafaktur. Brett had a mezzanine office overlooking the workshop, which was big enough for perhaps a dozen cars to be worked on.

Porsche had a very positive attitude to customers who raced as it viewed them as useful back-up should the factory effort fail. Brett brought out lists of possible modifications that could be made to the standard 911S road car to prepare it for competition and suggested items that would be relevant for the Targa Florio.

Rob remembers discussing the need for a long range fuel tank and aluminium underside protection plates. He wanted to delete the standard foglights to get more air to the front brakes but Brett advised him that would contravene the car’s FIA homologation. The standard 160hp S engine could be upgraded to over 180hp with the addition of a Sport Kit which included bigger carburettor jets, harder plugs, a free flow exhaust and removal of the air filter system. However Brett advised against fitting these to the car before it was run in. There wouldn’t be much time between the car being completed and Targa Florio practice starting. So they hatched a plan for Rob to pick the car up from the factory, run it in by driving it down to Sicily and then have the Sport Kit fitted by the Repair Department when he arrived.

The question of gear ratios came up and after consulting with the department’s gearbox expert Brett advised that the standard road ratios would be best. Although the Targa had many twists and turns it also had a very long straight section which would have been compromised by fitting a shorter set of ratios. Discussion continued for most of the day and even included consideration of the car’s likely sponsorship by Shell and the logistics of making sure it was filled with the most appropriate Shell formulation for the race. Before leaving Rob phoned Dan back in London to make sure he was happy, and the following morning he caught a flight home.

Four months later, on the second weekend in May and just three days before practice was due to start in Sicily, the car was ready for collection. Rob took an early flight to Stuttgart and by mid-morning was at the new car delivery department to see the car for the first time. This was a large and fairly utilitarian building which Rob describes as being like an indoor car-park. None of the flashy plate glass and chrome of a modern Porsche Centre.  He was greeted by Rohgert who apologised and said that his car needed a few last adjustments and wasn’t quite ready. As a young man Rob admits to being quite overwhelmed by the occasion and didn’t dare to question what was going on. After a few minutes, a beautiful brand new yellow 911 appeared with Herr Brett himself at the wheel. He explained that they had mistakenly fitted the wider 6” steel wheels – the standard Fuchs were only 4.5”. After a brief discussion with Roghert out of Rob’s earshot, Brett said he had a few minor adjustments to make. He then picked up a panel beater’s hammer and dolly from the passenger seat of the car and proceeded to roll the lips of the front wheel arches there and then. He seemed completely at ease with what he was doing, as if he’d done it a thousand times before. Once complete he shook Rob’s hand, wished him the best of luck at the Targa Florio and walked back across the road to his office.

Unbeknown to Rob, another customer had been watching what was going on. He introduced himself as a US fighter pilot who was on leave from active service in Vietnam. He was due to pick up his own new 911 before taking it back to his air base to be flown back to the US, but it wasn’t going to be ready that day. Rob explained that he was setting off that same afternoon to drive the car down to Sicily and the American serviceman asked if he could join him as far as the Austrian border – just for the experience of riding in the car. He even offered Rob his US Air Force petrol tokens to persuade him. And so that is how Rob started his journey towards one of the world’s greatest motor races.

Rob’s story of that journey and the race will have to wait for another time, however the fact that he can remember the process of buying the car in just as much detail as the race itself tells me something of the impact it had on him.

It certainly resonates with me, as I find a joy in the process of buying a new car and the myriad of decisions that have be made that affect its function, aesthetics and price. I want to talk to somebody informed who can help me make the right choices, I like to experience physical examples of the end product and I even enjoy the anticipation of the wait to see if I got it right. Somehow I don’t think the internet will be offering me any of that any time soon.