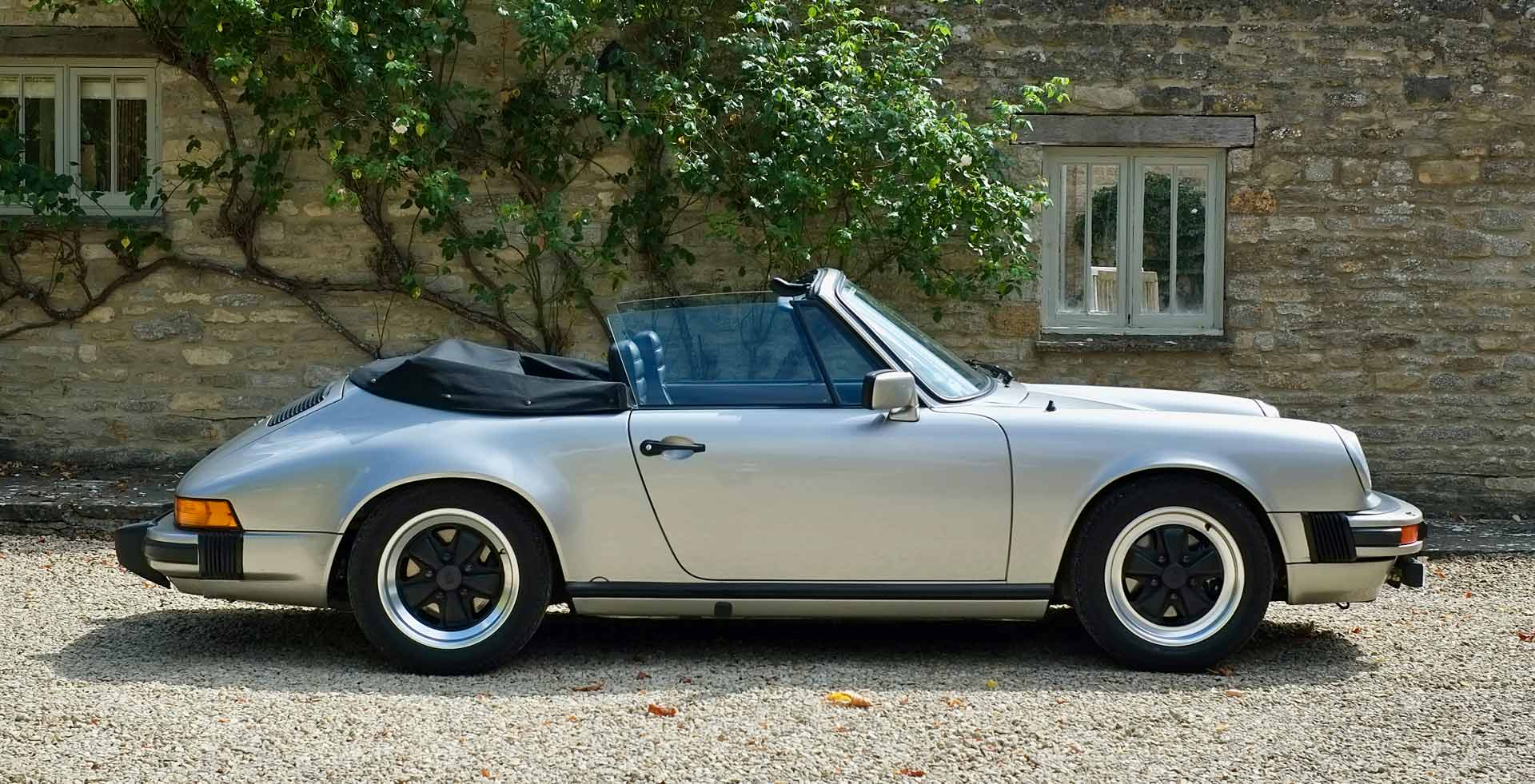 Pretty much from the start of the motoring age, there’s been a Darwinian process at work. A merciless and generally over-supplied marketplace has forced manufacturers to frenetically respond to their customers’ desires. As a result, cars in general have become far more reliable, economical and comfortable, and with some regulatory encouragement much safer as well. However as far as sports cars are concerned, consumer demand has also dictated that each new generation be faster and more powerful than the last.

This might have made sense in the 1970s when there were a third of the cars that are on the road today and no such thing as a speed camera or smart motorway. My favourite automotive article is still Mel Nichols’ “Convoy” in the February 1977 edition of Car Magazine. He relates every car mad 14-year old’s dream of driving three new Lamborghinis from the factory at Sant’Agata back to England – at more than 160 mph for much of the journey. But in an age when traffic clogs most roads and the attitude to speed enforcement has become a great deal more zealous, rather than be applauded by the gendarmes as Nichols was, you would now likely end up in jail.

The car makers are no fools and with billions of Dollars at stake they take a lot of trouble to work out what their customers want to buy. So why is their market research telling them we crave 700 hp monsters that can reach three times the national speed limit? My guess is that the sports car customer of today still has the car buying psychology they learned as a teenager. I will admit to childhood memories of peering through the window of a parked BMW or Mercedes to see how high the speedometer went. If you found one with 160 mph printed on it that was special. As anyone who played Top Trumps in their youth will tell you, “More is definitely more”.

However, the advent of the EV is starting to make us question this mindset. Now it is very simple to make pretty much any car go incredibly quickly. You don’t have to be Porsche or Ferrari with decades of experience in motorsport. You don’t need sequential turbos, trick valve gear or slippery Cd factors. You just need a bigger electric motor, easily purchased from one of many suppliers. Fast just doesn’t seem to be as clever as it once did.

Of course, our love for sports cars isn’t just about speed. But if ultimate performance is no longer useful or impressive, the definition of what makes a great driver’s car changes. For example, debates about which is the best 911 that Porsche has made usually reduce to a battle between different generations of RS. However, if the extra performance they offer is becoming largely irrelevant, could some of the less obvious cars in Porsche’s back catalogue actually be better to drive today? 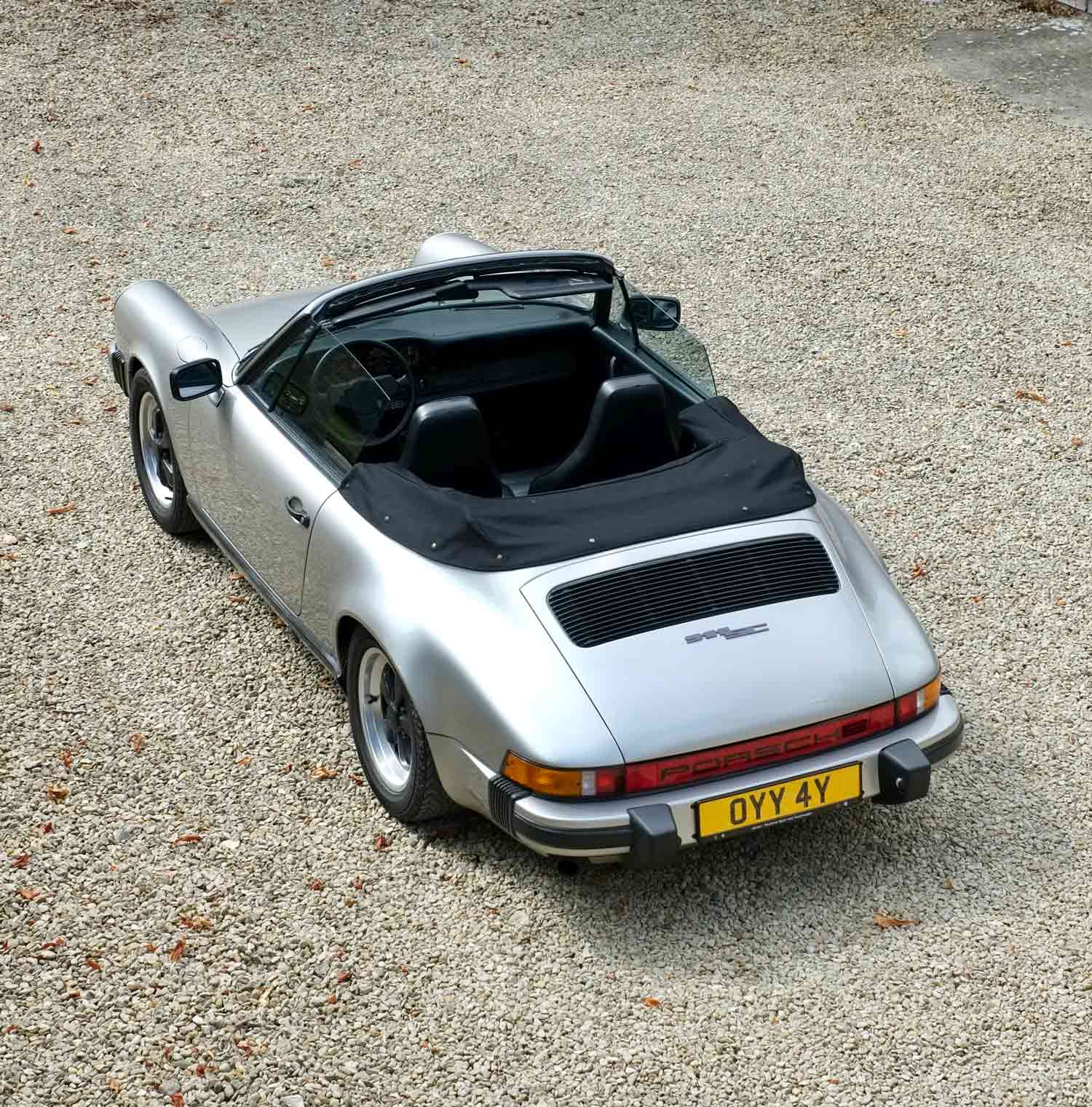 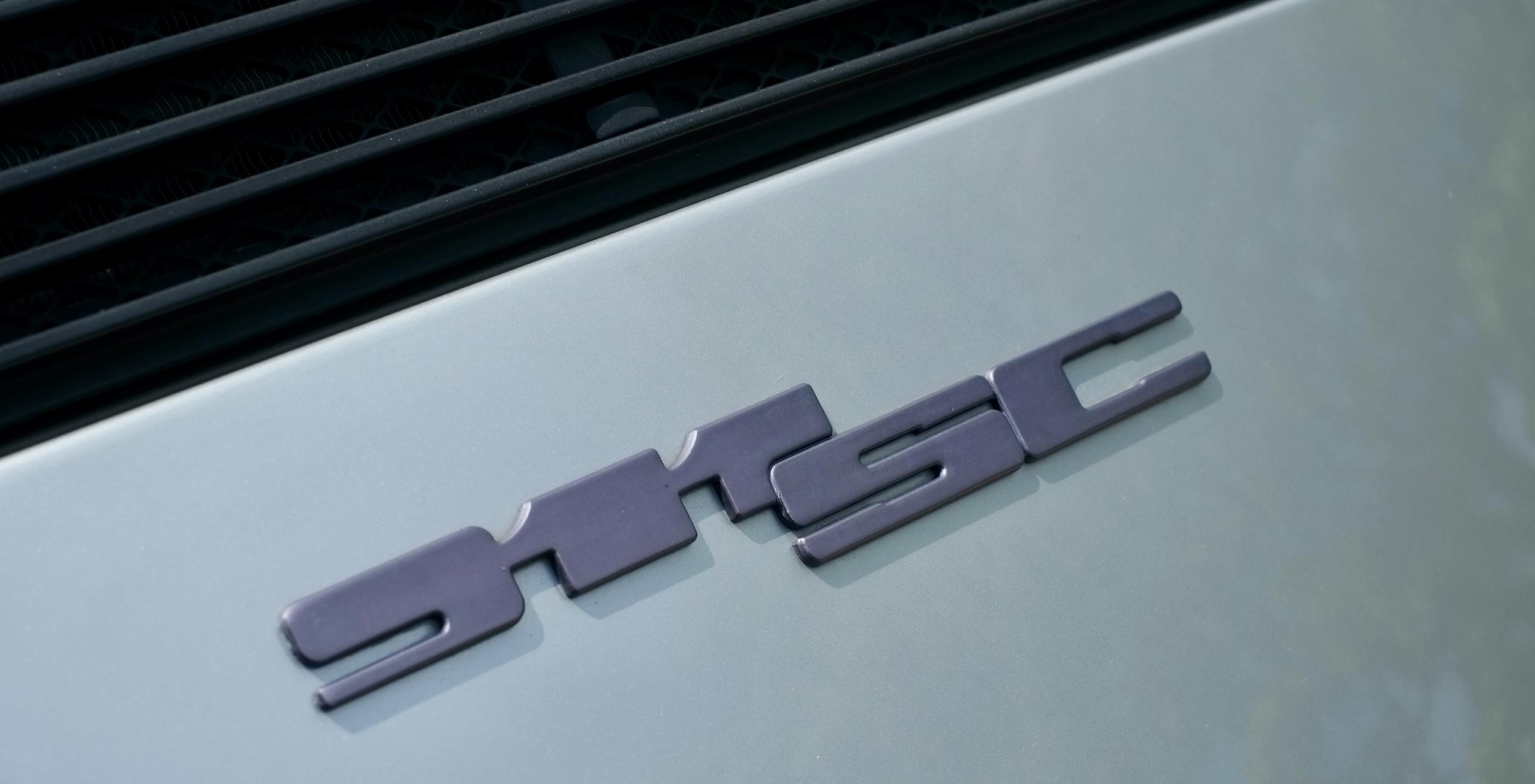 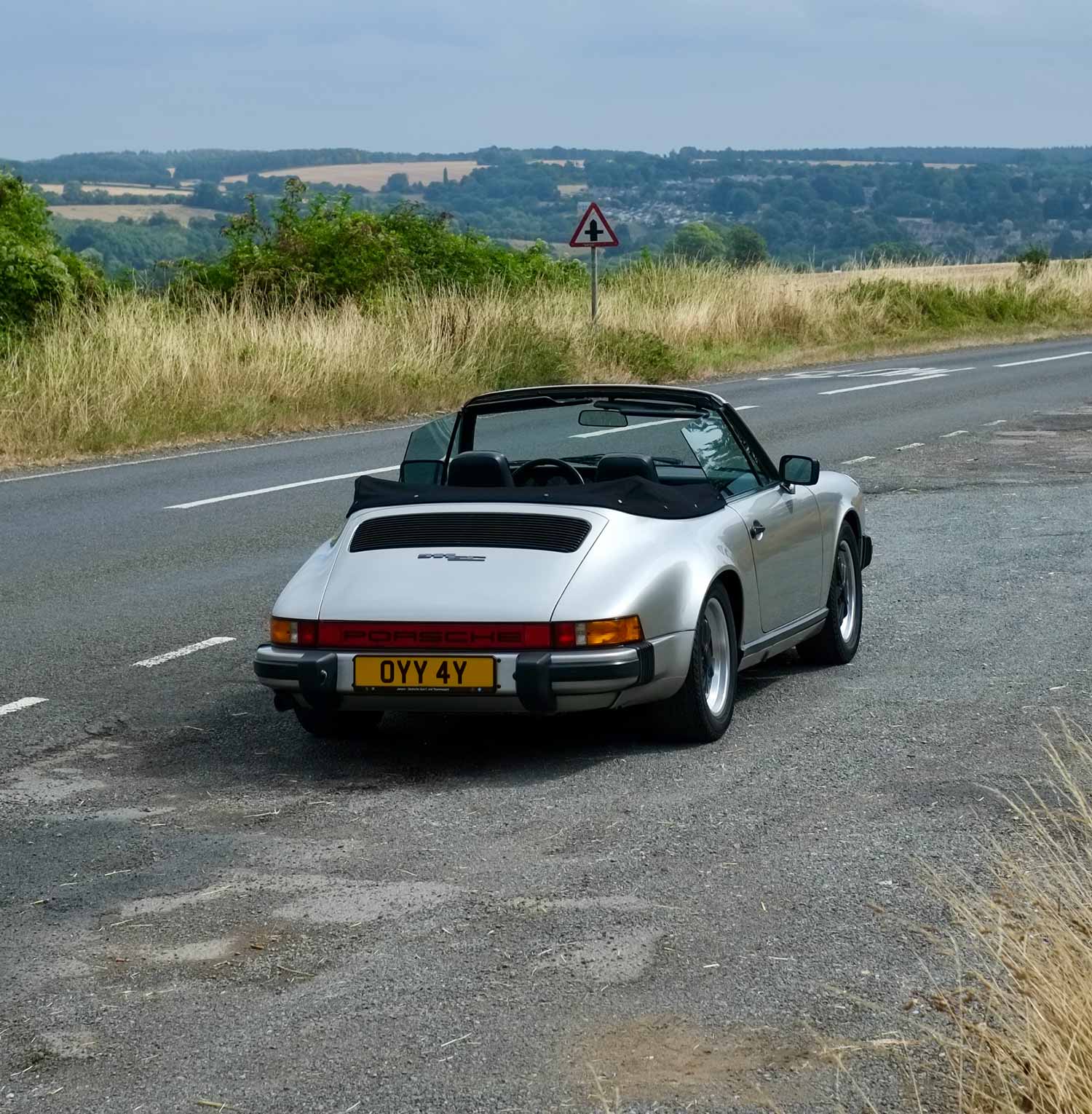 I had reason to think about this question earlier this year when preparing for my regular pilgrimage to Le Mans. When I first undertook this trip 25 years ago, it was a marvellous free-for-all blast across spectacular French country roads. I used to pick the fastest and least practical 911 I could lay my hands on. You could forgive the lack of creature comforts for the chance to drive full chat across the Normandy countryside chasing another 911 through the avenues of Poplar trees. Sadly, the route has now become a radar monitored cruise with little to distract you from the discomfort and irritations of an early RS. You could opt for a later GT3 of course but such are their capabilities you will struggle to find a reason to take the PDK box out of “D”.

When pondering which car to take I happened to be given the opportunity to try a great example of a late 70s 911 SC. These cars have often caught my eye as their impact bumper looks have somehow improved with the passage of time, especially when shorn of the outlandish spoilers. But the surprise was just how quintessentially 911 they are to drive.

The qualities that make a 911 so special are all present in the SC. The chassis is very little changed from the original 1963 design, and it occupies the same tiny footprint on the road. The engine is an unstressed fuel injected 3 litre which has enough mid-range torque to give you some proper over-taking shove while retaining that rev hungry nature that begs you not to change gear too early. It also sounds terrific with a classic turbine like whine that will turn the head of any Porsche enthusiast in the vicinity. The SC weighs a modest 1,160 kg which is to the benefit of how the car accelerates, stops and corners. It’s brisk enough to be fun but not so fast that you are constantly frustrated by the traffic in front of you.

Perhaps most noticeable is the build quality. The doors shut with that unique Porsche “ping”. The controls exude a sense of precision manufacture with no slop or excess movement. The SC has a sort of perfect tactility which I can’t remember any other 911 quite possessing. This doesn’t mean it’s an easy car to drive. Indeed, the heavy over centre clutch, long throw gearchange and floor hinged pedals will have a novice driver kangarooing down the road with the merest provocation. But the SC rewards anyone who invests some time in understanding it. The often-derided Type 915 gearbox initially seems determined to resist your instructions but find the right rhythm and it lets you feel every gear meshing and engaging. There is a technique you have to learn but when you get it right it suddenly becomes quite effortless. Rather like hitting a golf ball out of the middle of the club or carving a turn in skiing, the sense of achievement is addictive.

And that was my revelation. The 911 used to be a car bought by enthusiasts because of its idiosyncrasies not in spite of them. The SC marked the point after which Porsche started its quest to broaden the car’s appeal. I’m sure that was necessary to ensure the long-term survival of the 911 and the Porsche company itself. The cars became more capable and far more accessible, but with the odd exception I’d argue they became less rewarding.

That experience was enough for me to make the leap and just a few months later I found myself in my own newly acquired SC travelling the back roads down to Le Mans Classic. Sure, I was overtaken by GT3s and Turbos many times, but who was having more fun? I think I know. Driving a car from the 70s on modern roads has to be better than wishing you were driving your modern car on the roads of the 70s.