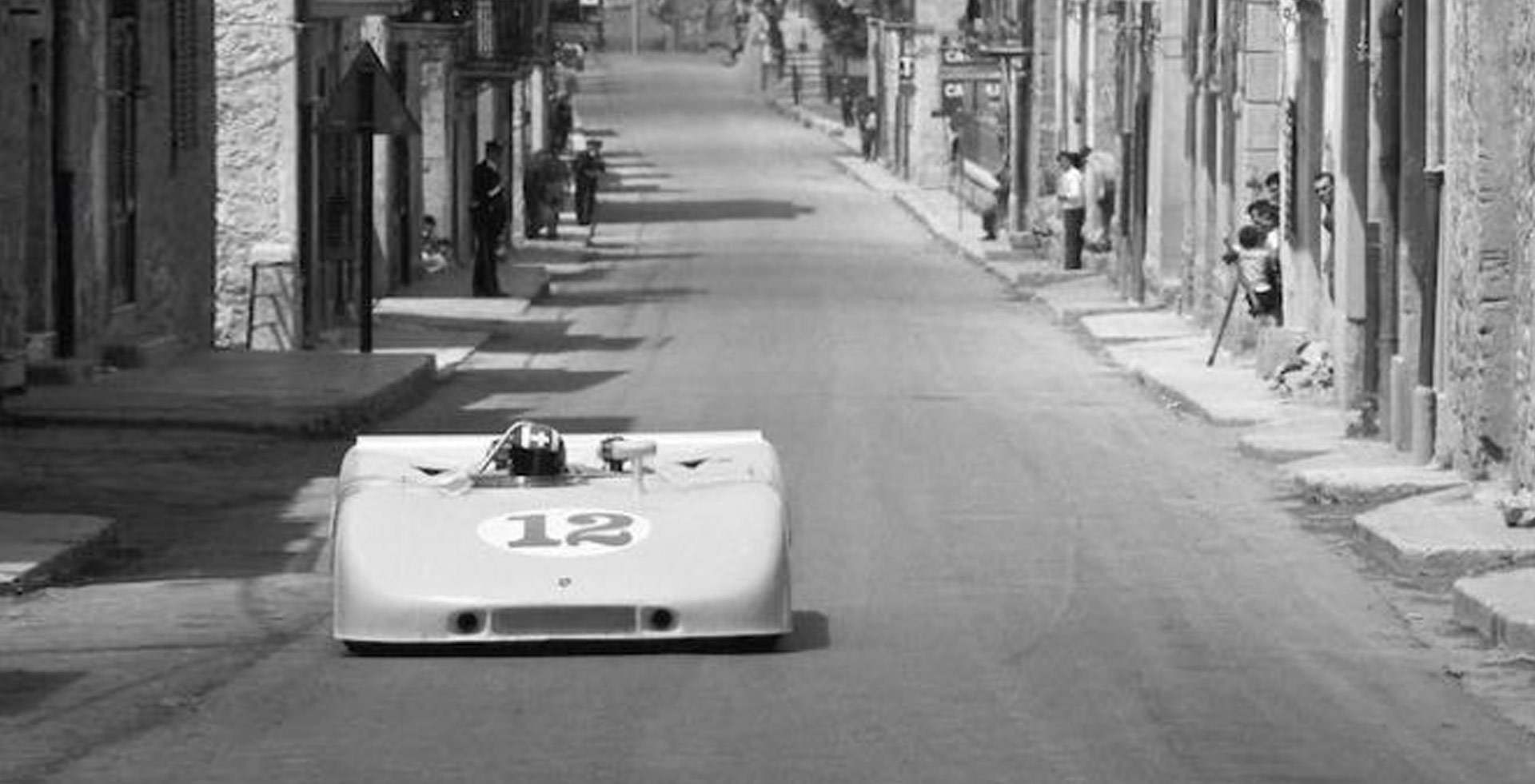 The first sighting of Porsche’s new 908/03 race car half a century ago caused a sensation. Yes, the 908 Spyder had been in action for a couple of years, but this was something quite out of the ordinary. Smaller, lighter, with the driver seated well forward. The polyurethane bodywork weighed just 12 kilograms, we were told, an astonishing figure, and was said to be so translucent that the drivers’ feet could be seen ahead of the front wheels (although the paintwork obscured this feature).

Ferdinand Piëch, whose brainchild this was, glowed with paternal pride. “Every gram that we save is one less gram to be braked, to carry round the corners, to accelerate out” he told me (and yes, 50 years on, I have a good recollection!).

The chassis was made of aluminium tubes, extensive use was made of titanium and other exotics, and the car was powered by the 3 litre flat-eight air cooled engine developing 350 horsepower. The complete car weighed 545 kilograms, yielding a power-to-weight ratio of 680 bhp per tonne. Special, yes, because the 12-cylinder 917 had virtually the same power:weight. “It was a special little car, like a roller skate” reckoned Vic Elford, part of the first driver team. One of the features of the 908/03 was the placement of the differential behind the gearbox, shortening the wheelbase and improving the polar moment of inertia for faster steering response, but it meant that the engine was moved forward and so, too, was the driver.

Four cars, prepared in secrecy, made their public appearance at the Targa Florio race in Sicily in May 1970, three of them in the blue and orange colours of JW Automotive’s Gulf Racing team, each with a card symbol, a diamond, a club and a spade, a tribute to the markings seen on Ferdinand Porsche’s Austro-Daimler Sascha team in 1922.

Jo Siffert and Brian Redman led the driver team backed by Pedro Rodriguez and Leo Kinnunen, and rally ace Bjorn Waldegard with Richard Attwood. The fourth car was presented, to John Wyer’s annoyance, in the colours of Porsche Salzburg, described by Piëch as “a customer team” with white bodywork adorned with red colouring across the nose, for Elford and Hans Herrmann. In reality all four were Porsche factory cars, a works team, with Wyer’s crew running an emergency pit at Bivio Polizzi, halfway around the circuit.

It was Siffert who set the fastest practice lap (each driver was allowed just one lap of the 72 kilometre mountain circuit, others being reconnaisance in rental cars!) with Elford second, but Piëch had one surprise up his sleeve, asking Elford to make a comparative lap in a 917 which had been taken to Sicily for show purposes.

“As much as I loved the car I had no desire to race it, but the idea of driving one lap ‘just to see’ intrigued me, so I had no hesitation in saying yes. However by the time I reached Cerda, just eight kilometres from the start, I was already having second thoughts.” The car “leapt from corner to corner, and I did virtually the entire lap using second and third gears.” He drove straight to the paddock, exhausted, but had made the fourth quickest time.

Elford’s race was very short indeed. Soon after Cerda he found a rock in the road, possibly dislodged by a car ahead, swerved to avoid it and clouted a kerb, damaging the front suspension. Siffert and Redman had a fight on their hands, perhaps the Swiss was taking it easy on the opening lap as Gerard Larrousse, in a 908/2, led Siffert and Kinnunen first time past the pits, ahead of Nino Vaccarella driving his heart out in the works Ferrari 512S shared with Ignazio Giunti.

Rodriguez, brilliant everywhere else, did not enjoy himself in Sicily. It was said that he was unwell, but Kinnunen amply made up for this with his pace, and set the fastest lap of the race on his final tour, a record of 36m 36s that was never beaten in the three years that followed. Hans Laine, the young Finn, was among the leaders until the front-right wheel fell off his Wihuri team 908/02 at Campofelice, approaching the 5-mile straight along the Mediterranean seafront. The Porsches lacked downforce, demonstrated as the front of Laine’s car lifted at high speed and stayed up until he reached the final turn to the pit-front, arriving with a shower of sparks from the iron brake disc. The wheel was replaced and Gijs van Lennep continued to finish in fourth position.

The 5-litre Ferrari continued to threaten, but Redman managed to get by as the Italian car took longer to refuel, and then Kinnunen was able to overtake Giunti to take second place. A 1-2 for the Gulf team Porsches, third for the gallant Ferrari team, fourth for Wihuri, and fifth for the third Gulf entry with drivers off the pace. 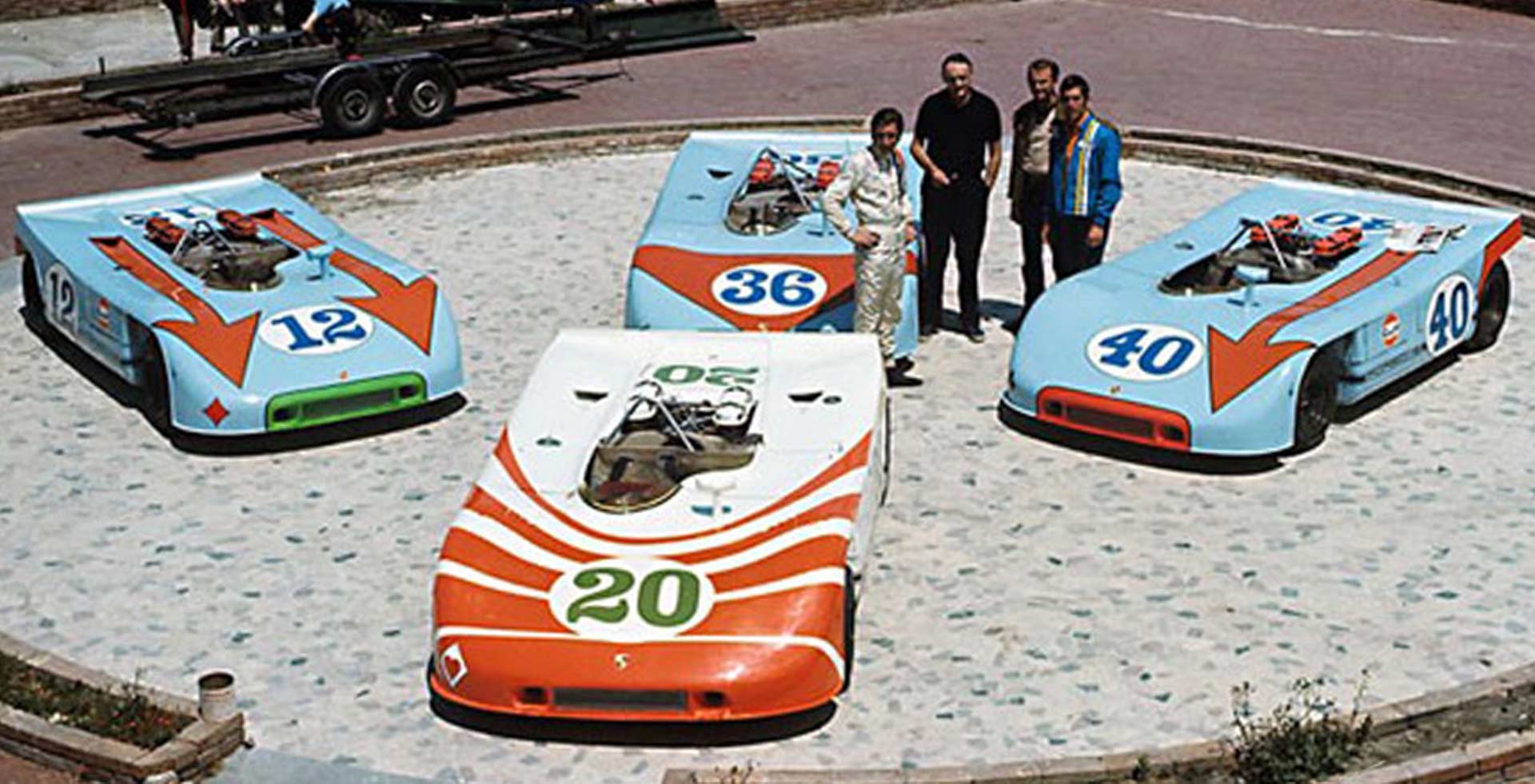 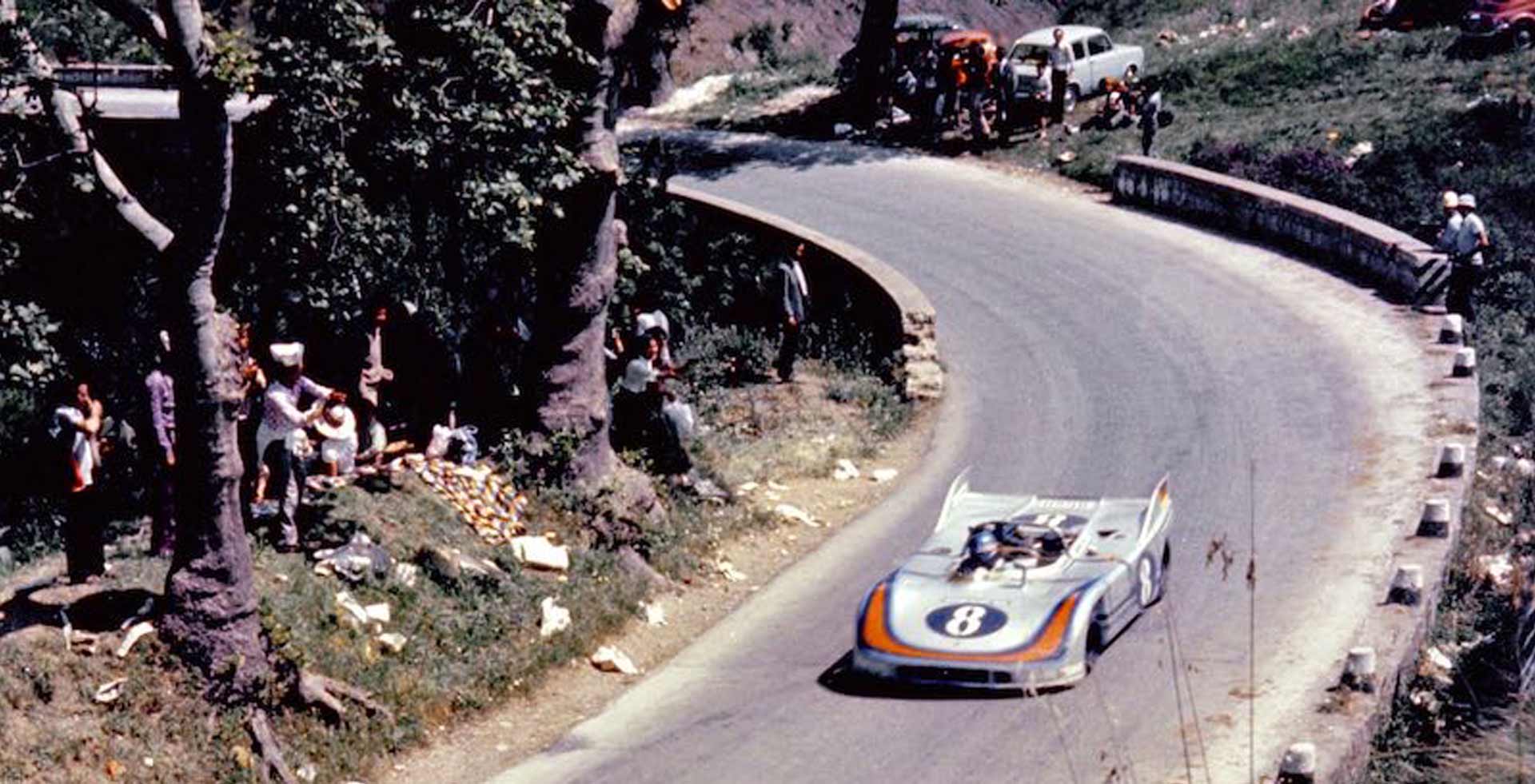 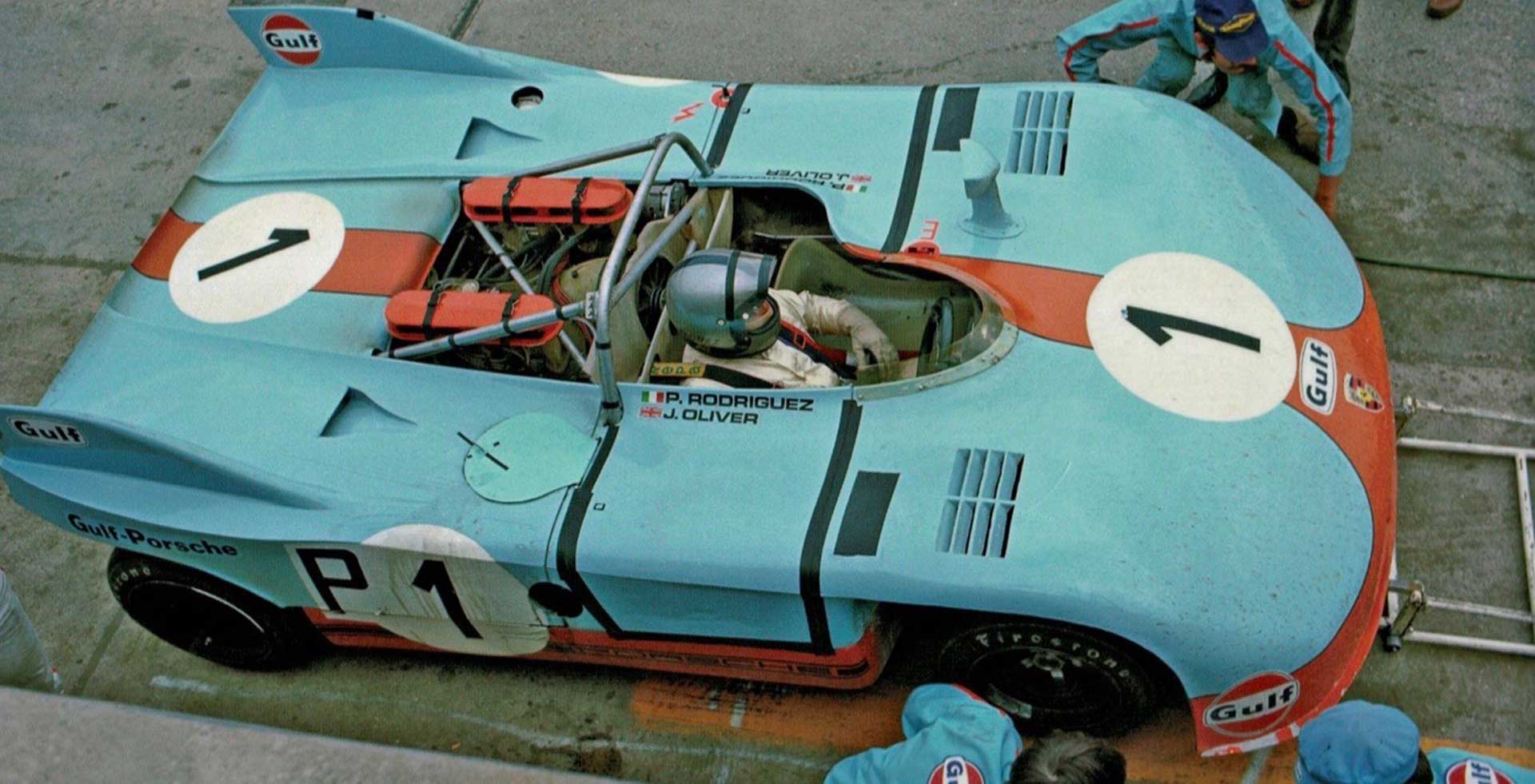 The 908/03s were prepared for two specific races, the Targa Florio and the ADAC 1,000 Kilometres at the Nürburgring, and in Germany JW Automotive ran the two Gulf entries, Porsche Salzburg two more. The cars were fitted with 15-inch diameter wheels rather than 13-inch, with larger disc brakes, and they made all the running ahead of the Ferrari and Autodelta Alfa Romeo teams. Siffert and Rodriguez were quickest on Firestone tyres ahead of Elford and Herrmann on Goodyears, and that was the order at the first pit stops at quarter distance, after 11 laps of the Nordschleife.

Piëch failed to mention to Wyer that the ‘threes’ had high oil consumption.  Kinnunen retired shortly after taking over, with a failing engine, and Redman had to slow with failing oil pressure. His car was finished at half distance, leaving the two Salzburg cars to sweep to victory, Elford and Ahrens ahead of Attwood and Herrmann.

The lack of downforce, already noted, contributed to the death of Hans Laine, the young Finn so evidently talented that Wyer was chasing him for a signature, with an eye to a contract in 1971. Van Lennep had knocked a front canard off the Wihuri 908/02 towards the end of practice on Saturday, and Laine took the car to scrub new tyres. But when he reached the brow on the long Tiergarten straight the car reared, landed upside down and caught fire with tragic consequence. So my interview with Laine on Saturday morning, for Motoring News, proved to be his obituary. Motor racing was very cruel in those days.

The 908/03s were put away until the 1971 season and wheeled out, again, for the Targa Florio and the Nürburgring. They had wider rear wheels, the downforce was increased with a skirt around the nose panel, and two longitudinal fins were seen above the rear wheels, increasing the top speed. The cars were 20 kg heavier in ’71 with a reinforced rollover bar for driver protection and an on-board fire extinguishing system was installed. The cars were in fact slower than they had been 12 months previously, due to a significant increase in the aerodynamic drag factor.

Three ‘threes’ were taken to Sicily, up against a trio of Autodelta Alfa Romeo T33 race cars which claimed the fastest qualifying times. Siffert crashed heavily on his single timed lap, the mechanics working all night to repair the front end, Elford slid off the road and damaged a radius rod, and again Rodriguez was off the pace.

Porsche’s fortunes dived still further on race day. Redman was asked to start the race, unusually, and straight away he felt that there was something wrong with the steering. Determined to drive carefully to the pits, he lost control as the steering broke on the fast downhill section to Caltavaturo. It hit a roadside marker on the right-hand side of the car, breaking the fuel tank and causing an inferno that engulfed the driver.

Redman called it his “Joan of Arc” moment, managing to release his harness, leap from the wreck and roll down a hillside with his overalls ablaze. Spectators beat the flames with blankets but he sustained serious burns to his face, neck, back and hands. It was close to midnight before Rodriguez and Attwood tracked him down to a filthy hospital, swathed in bandages, and got him back to the team hotel where a flight to Manchester was arranged. It was months before his recovery, with scars, was complete but he was back racing in Formula 5000 just seven weeks later.

Rodriguez also crashed on the opening lap (“they had painted Viva Pedro on the road, and he skidded on the wet paint” remarked the laconic John Wyer). Elford led, but on the seventh lap his co-driver Larrousse collected a puncture that damaged the suspension. So it was that the Alfa Romeos achieved a popular 1-2 victory.

One big plus for Elford was making the fastest lap, which earned him the Ignazio Giunti trophy recently presented by the Italian’s mother. “Ignazio was a friend of mine, it was a tragedy when he died at Buenos Aires, and when I heard about the trophy I decided ‘it’s mine’. And I made sure I got the fastest lap, it is one of my most prized trophies.”

Two brand-new 908/3s, the eighth and ninth in the series, were built for the ADAC 1,000 Kilometre race at the Nürburgring, and fittingly these were allocated to the Gulf team for Siffert and Derek Bell, Rodriguez with new signing Jackie Oliver. The Salzburg team was discontinued at the end of 1970, the operation taken over by Hans-Dieter Dechent with backing from Martini & Rossi. Their cars were driven by Elford and Larrousse, van Lennep and Helmut Marko.

Jacky Ickx was on top form in the new Ferrari 312P, storming off into the lead and setting a new sportscar lap record, but his race was cooked after six laps with an overheated engine. At seven laps, quarter distance, Siffert retired at the pits with his 908/3 handling badly, denying Bell the chance to drive this little sports car. Rodriguez was suffering ill handling, too, and Siffert was delegated to take over. Oliver took this decision very badly, and his relationship with Wyer never recovered.

Elford and Larrousse romped to victory, and some way behind, Rodriguez managed to claim second place by weaving his car on the long straight to keep van Lennep in his wake.

Porsche’s little wonder-cars claimed the top three places, ahead of two Alfa Romeos. It was only the fourth, and final appearance of the 908/3s as ‘works cars’, and back in Weissach it was established that the two new cars had been assembled incorrectly, a supporting bar missing from the intersection of the rear chassis tubes.

The ‘threes’ were sold to private teams, notably that of Reinhold Joest, who campaigned strongly despite the minimum weight being increased to 650 kg, managing to win the Kyalami 9 Hours in 1973 with assistance from Herbert Muller. Joest achieved further successes in the 1970s powered by the new Porsche 2.1 litre turbocharged engine (rated at 3-litres by the FIA formula), and even won the opening round of the 1976 World Sportscar Championship at the Nürburgring.

Compared to the 917s, surely iconic racing cars, the 908/3s may only be a footnote in Porsche’s history, but they are well remembered as the ultimate in lightweight competition racers. 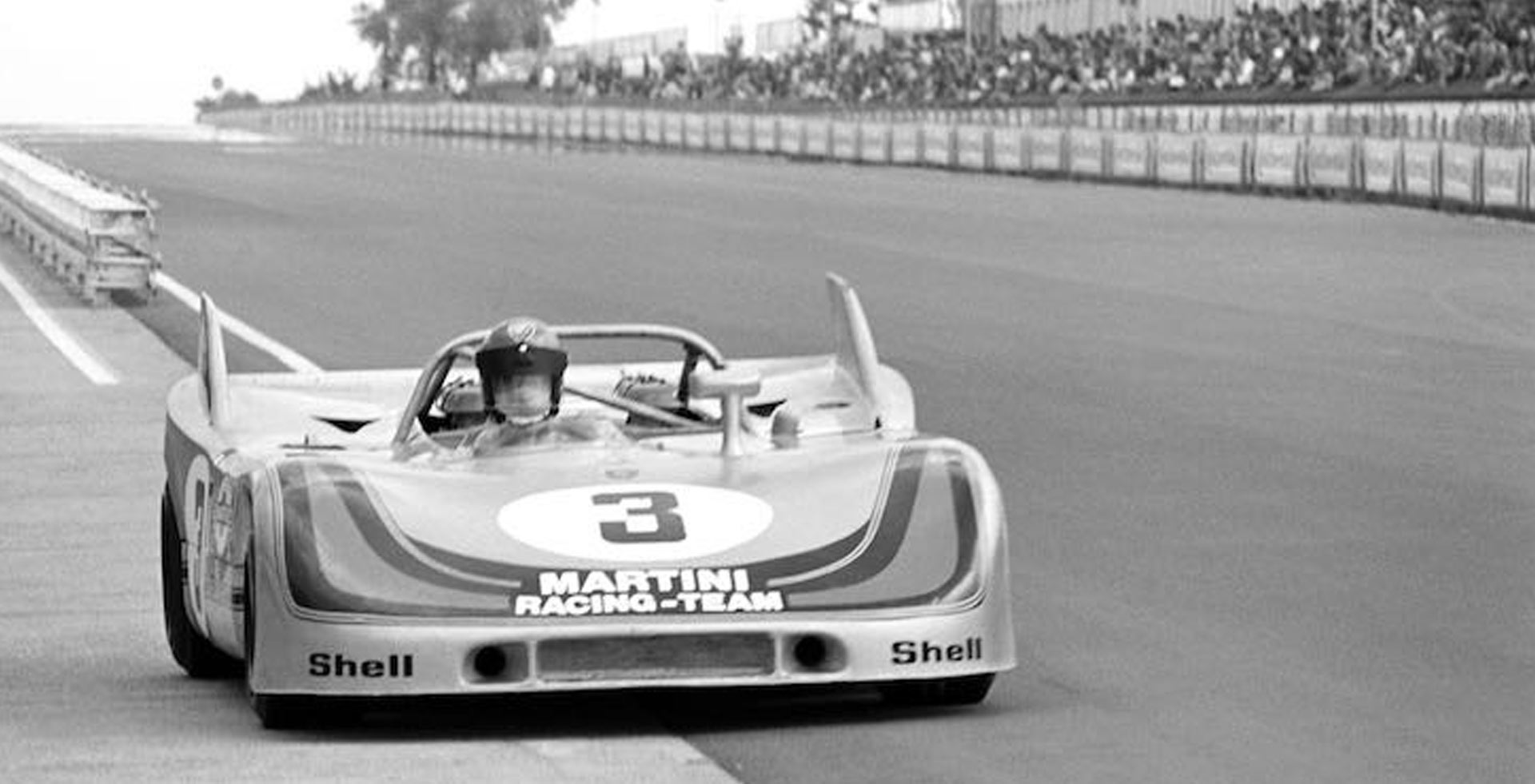 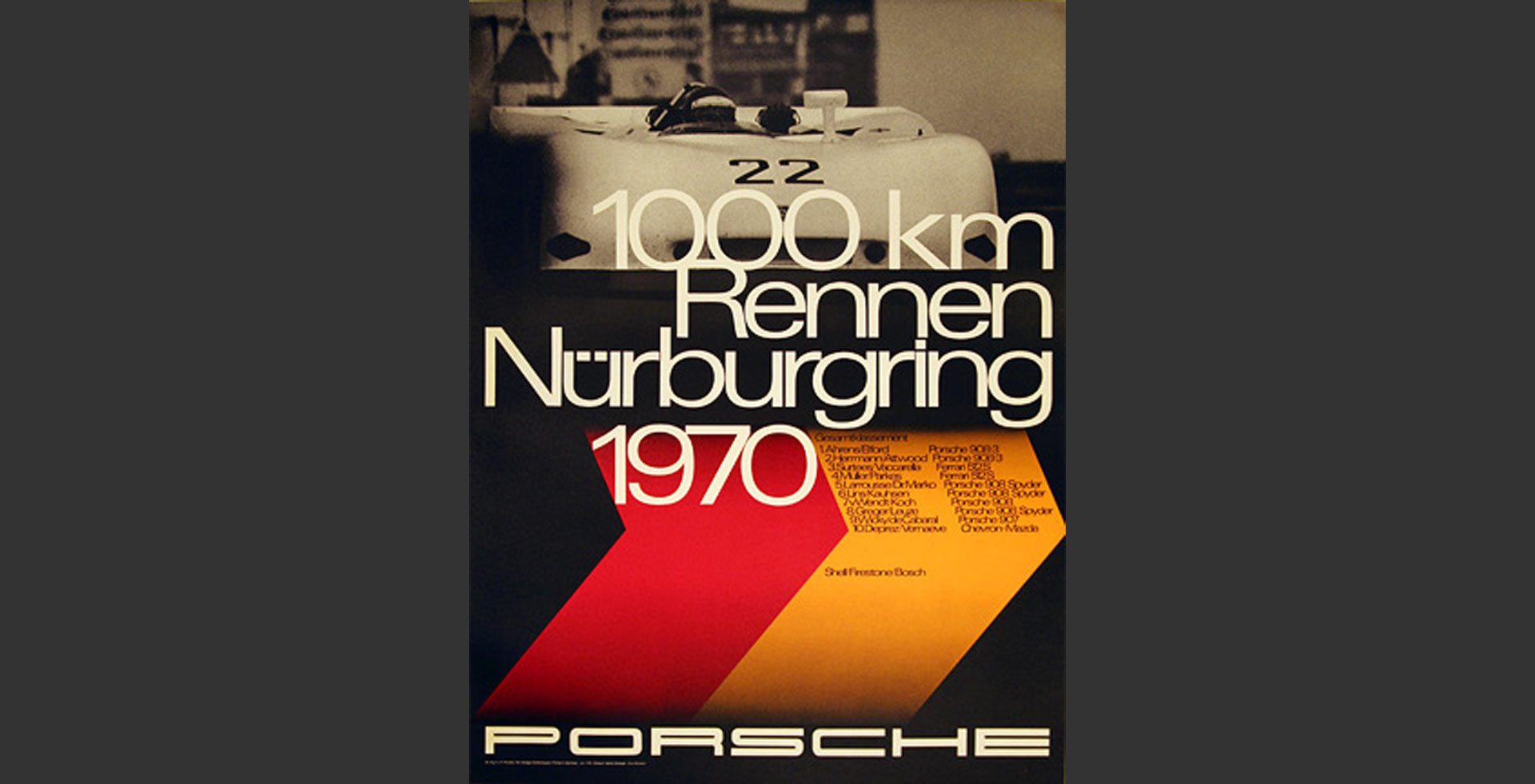