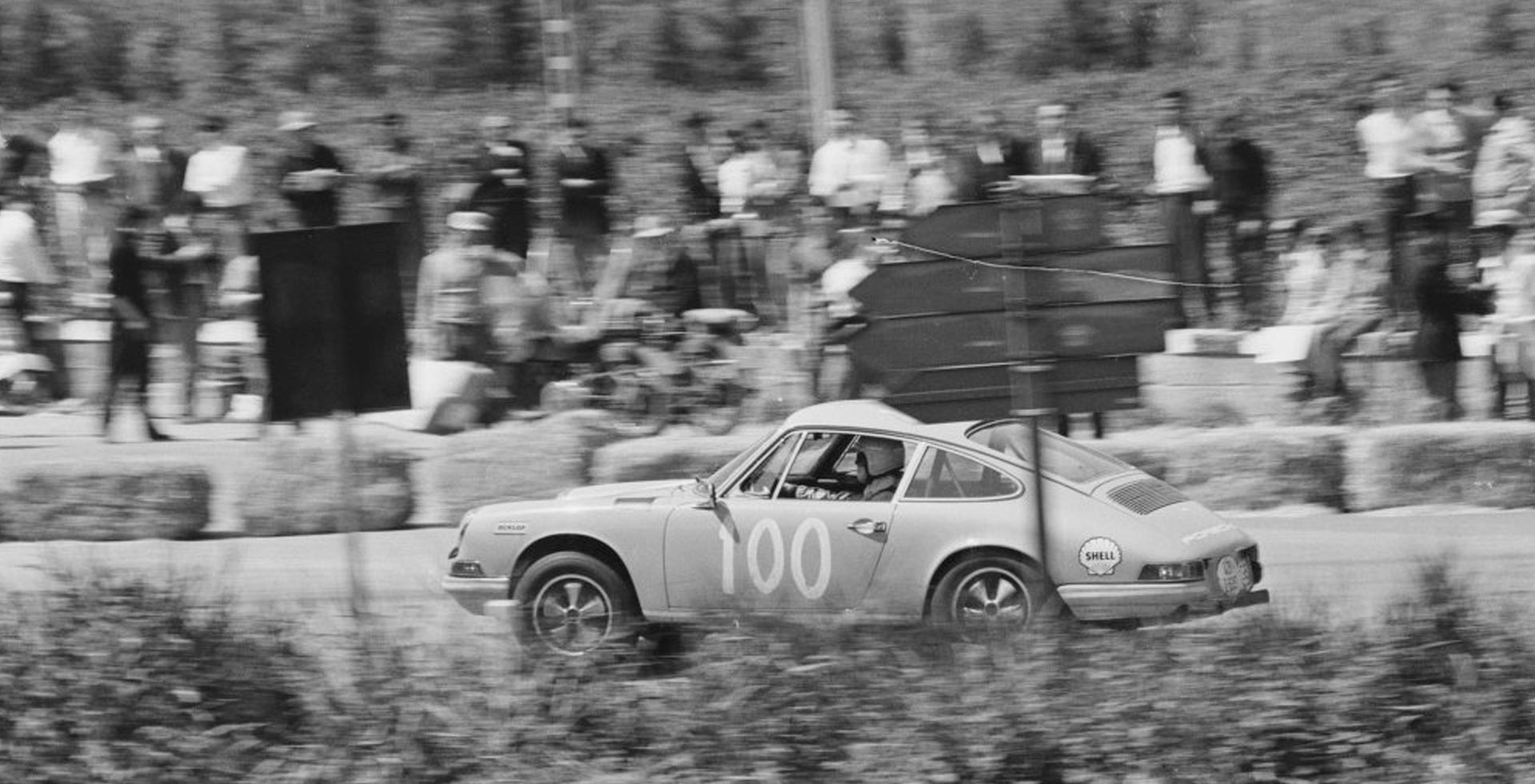 Of all the events I have attended in the course of 50 years, my favourite must be the Targa Florio, the rugged road race in Sicily.  And one of my all-time heroes is Vic Elford, the winner in 1968 despite an 18-minute delay with a wobbly wheel on his Porsche 907.

The event was created by Vincenzo Florio in 1906, comprising three laps, each 146 kilometres in length taking in the tortuous mountain roads in the southern part of the island, starting and finishing in Palermo. It was won by Alessandro Cagno who drove his 40 horsepower Itala single-handed for nine and a half hours, averaging just 46.8 km/h.  Six years later the course was extended to a single lap around the entire island, a distance of 979 kilometres, and this was won by a Yorkshire man, Cyril Snipe, who completed the distance in 24 and a half hours at an average of 41.4 km/h, driving an Italian SCAT touring car.

There were evolutions to the course, which was reduced to 108 kilometres in 1919, covered four times by winner AndréBoillot in a Peugeot, now averaging 55 km/h. Mercedes recorded their first victory in 1922, the second in 1924, and from there on Bugatti and Alfa Romeo were regular winners in the prewar years.

The first postwar race in 1948 went to the new marque, Ferrari, the 166S raced by Clemente Biondetti on a 1,080 kilometre course around the island. For good measure he won it again the following year in a 166 SC. Then, in 1951, the course was reduced to eight laps of a 72 kilometre Piccolo circuit, starting in Cerda on the Mediterranean coast and going straight into the hills to Caltavuturo, Collesano at an altitude of 600 metres, to Campofelice then down to the Buonfornello straight, along the sea-front, back to Cerda.  It was won by Franco Cortese in a Frazer Nash, a success much celebrated in Isleworth, south London, where the specialist sports cars were made by the Aldington family at their AFN works.

Stirling Moss had a remarkable year in 1955, driving for the Mercedes factory team. On the first day of May he won the Mille Miglia 1,000 mile sportscar race in a 300SLR co-piloted by Denis Jenkinson, the Motor Sport writer, at a shade under 100 mph average.  He won the British Grand Prix in July, at Aintree, his first Grande Epreuve success, in a W196, narrowly beating Juan Manuel Fangio, and to complete the season he won the Targa Florio in October, sharing the 300SLR with Peter Collins. The course was extended to 13 laps, 936 kilometres, and the two British aces averaged 96.29 km/h, just short of 60 mph.

Umberto Maglioli, already established as Ferrari Grand Prix driver, was invited to drive a Porsche 550 sports-racing car in the Targa Florio in 1956.  Huschke von Hanstein, Porsche’s competitions manager, had listed himself as co-driver but was curiously absent during the practice sessions, out on the course taking photographs, so Maglioli drove the 10 laps single-handed, nearly eight hours at the wheel, finishing a quarter of an hour ahead of Luigi Villoresi in an OSCA,  further ahead of Piero Taruffi in a Maserati and Olivier Gedebien in a Ferrari. It was a significant success for Porsche, the first of 11 victories in Sicily. To commemorate these victories Porsche named a special version of the 911, a model with a detachable roof, the Targa.

At a different level, maybe, Vic Elford’s golden year in 1968 may have surpassed Stirling Moss’s notable successes of 1955. He started the year by winning the Monte Carlo Rally in a Porsche 911, co-driven by David Stone, taking more than a minute off the Alpine Renault of Gerard Larrousse on a critical snow-covered section, hitting 120 mph in fifth gear on an icy downhill stretch. “I had never stretched myself, particularly my nerves, to such an extent before” he said afterwards. 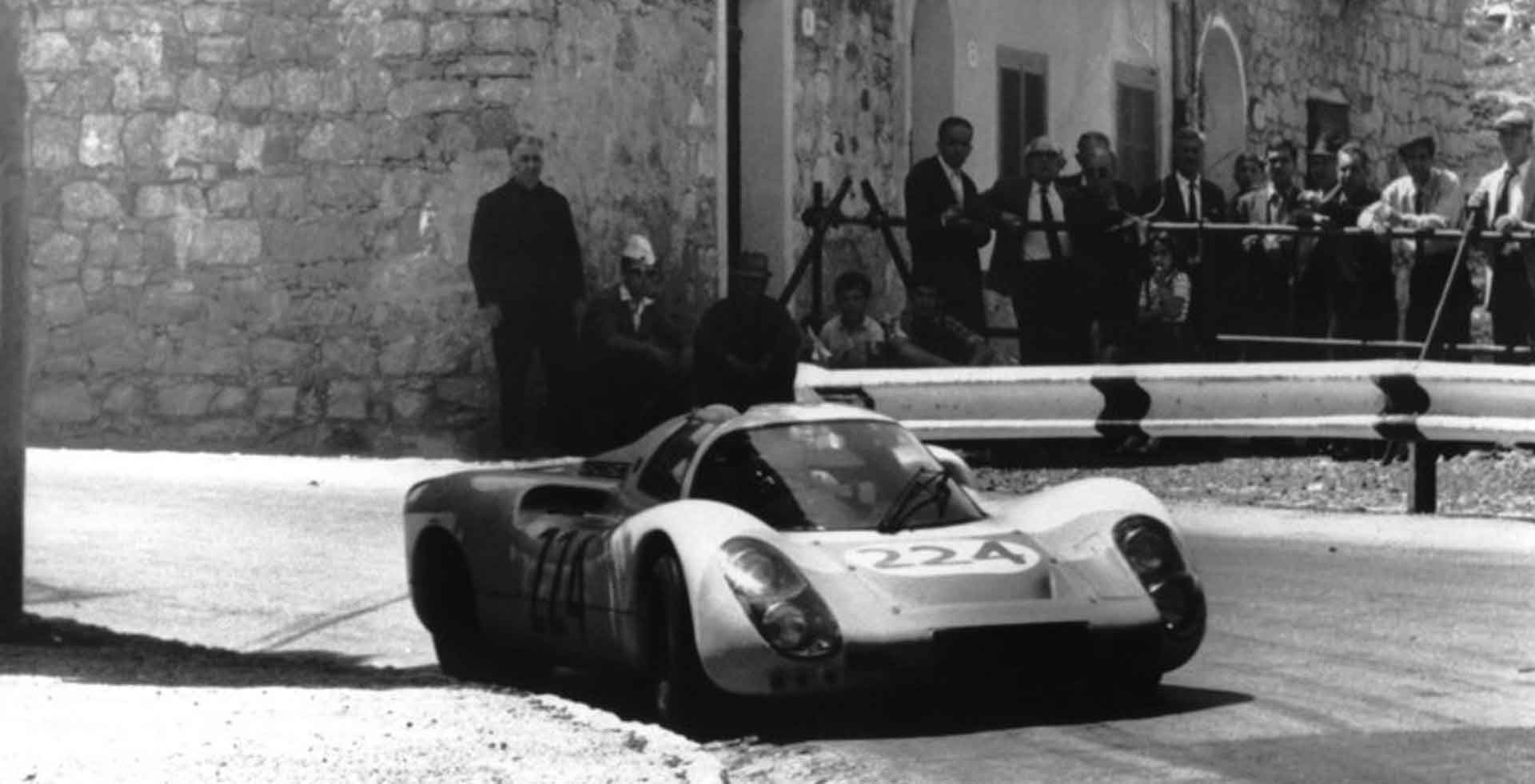 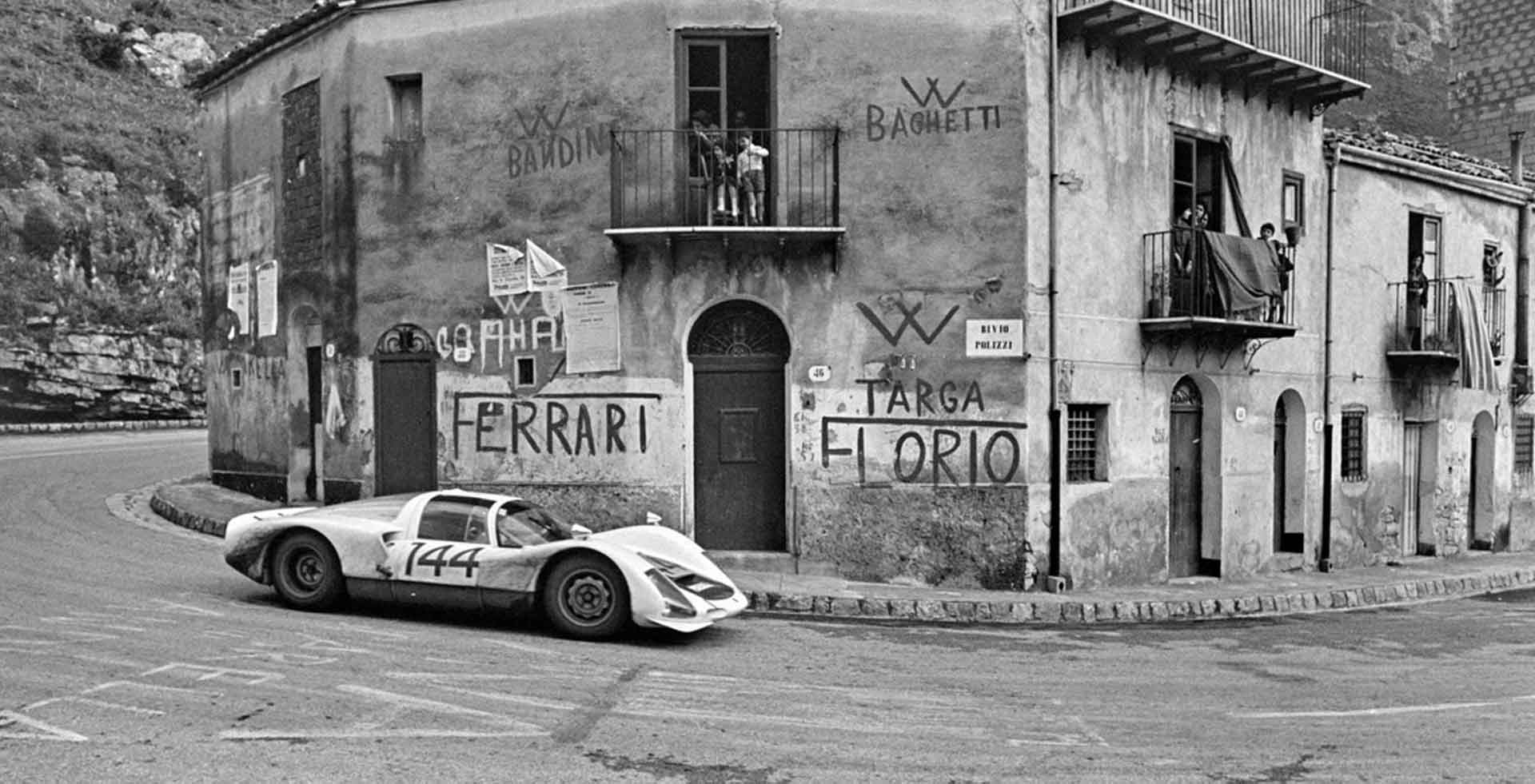 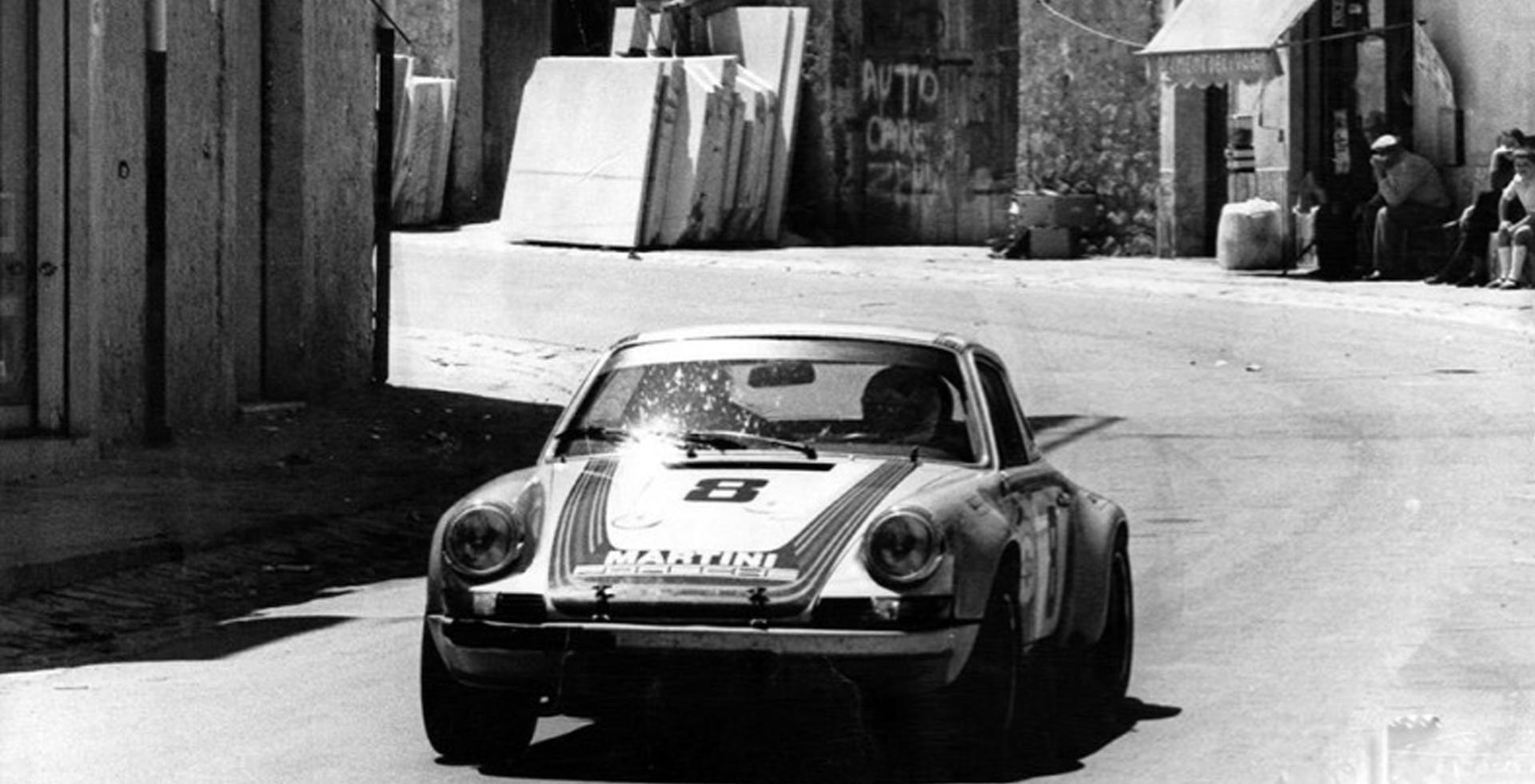 After the celebrations Elford got on a transatlantic flight to Florida, to compete in the Daytona 24-hour classic. He was a member of Porsche’s four-car team of 907 sports cars, powered by 2.2 litre flat-eight engines, and with Rolf Stommelen was the clear winner. Three of the cars claimed the podium places, though Elford and Stommelen were joined as winners by Jo Siffert and Hans Herrmann, whose car had lost a dozen laps with a gearbox problem; they were awarded first and second positions!

Then came the Targa Florio, on the 72 kilometre mountain course that might, surely, favour a top rally driver. Elford was allocated a 907 prototype, similar to the Daytona winner, on what would be its swan-song as a factory car, and his co-driver was Umberto Maglioli, now a 40-year-old veteran in the racing world. He might not be the fastest, but he was dependable.

Ellford started the race, climbed the foothills to Cerda, but after 10 kilomtres found he had no drive to the rear wheels. He thought the clutch had broken, or a driveshaft, but when he stopped and climbed out he found that the right-rear wheel nut had loosened and the wheel was sliding on its splines. There followed the most amazing scene he had ever experienced as a swarm of spectators gathered round and lifted the car while he tightened the wheel nut, using a brace from an on-board tool kit, and from there he continued at full speed to a Porsche “service point” halfway round the course.  There, the wheel was replaced and Elford continued, only for the wheel to come loose again on a fast downhill section. This time he went off the road and punctured a front tyre.

Again, spectators came from their vantage points and lifted the car bodily while Elford fitted the Goodyear Space Saver wheel and tyre. The tread section was only half that of the race tyre and he started cautiously, soon finding that he could press on and cover the five kilometre coastline road at full speed, 200 mph.  By the time he reached the Porsche pit in Cerda, and rejoined, he had lost 18 minutes and had no chance of winning. He was determined to claim the lap record, though, and drove the next laps as fast as he knew how. Ahead of him were Autodelta’s Alfa Romeo T33/2 sports cars, nimble and ideally suited to the terrain, led by Gerhard Mitter’s Porsche which was delayed by a broken driveshaft at half distance.

Maglioli was listed to drive four laps, with Elford driving the first and final three sectors, but following a short rest Elford asked the team to put him back in for the last four laps, in each of which he broke the lap record, setting a new mark of 36m 02s which was more than a minute quicker than anything before.  Porsche mechanics on the mountain signalled that he was in the lead on his penultimate lap, and he completed the 10thand final tour three minutes ahead of Ignazio Giunti and Nanni Galli in their Alfa Romeo, and nearly 10 minutes ahead of the third placed Alfa Romeo.

“As  I entered parc ferméin the paddock at the end of the race I felt totally drained, physically and mentally, so much so that two mechanics had to lift me out of the car. It took a couple of tries before I could pour the first bottle of my beloved San Pellegrino over my head and then actually drink some” he wrote in his autobiography.

For the first, and only time Porsche’s celebration poster featured the driver rather than the car. Technical chief Helmuth Bott told him it was because for once it wasn’t Porsche that won the race, it was the driver.

Still not resting on his laurels, Elford then partnered Jo Siffert in winning the ADAC 1,000 Kilometres of the Nürburging, the first of many victories for the new Porsche 908 model. Then in June, as a member of the Cooper Grand Prix team, he finished in fourth place in the rain-soaked French Grand Prix at Rouen-les-Essarts, his car powered by the Maserati V12 engine.

No driver, I believe, could ever surpass Vic Elford’s spread of achievements in 1968. He was, and is, a hero in Porsche’s history. 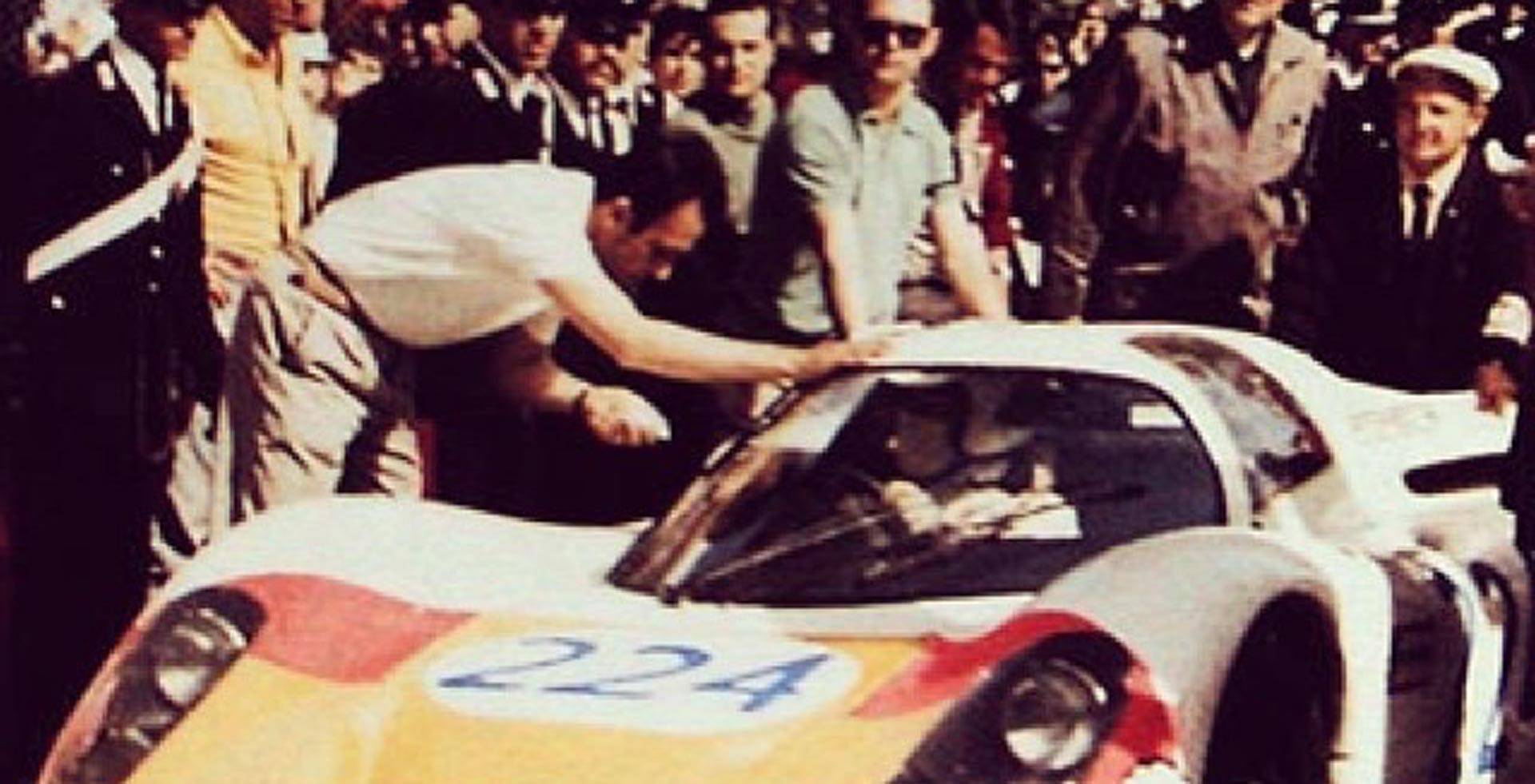 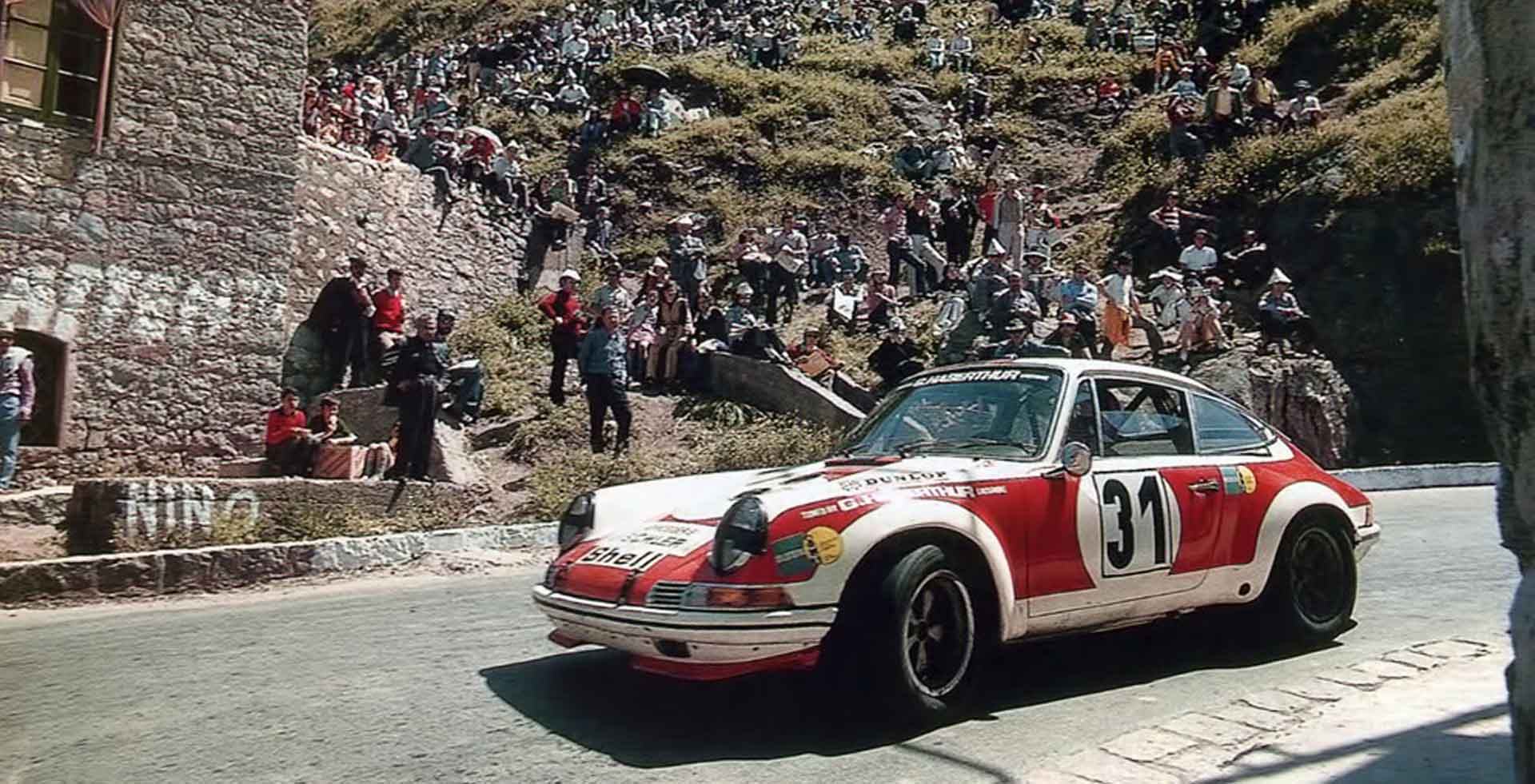