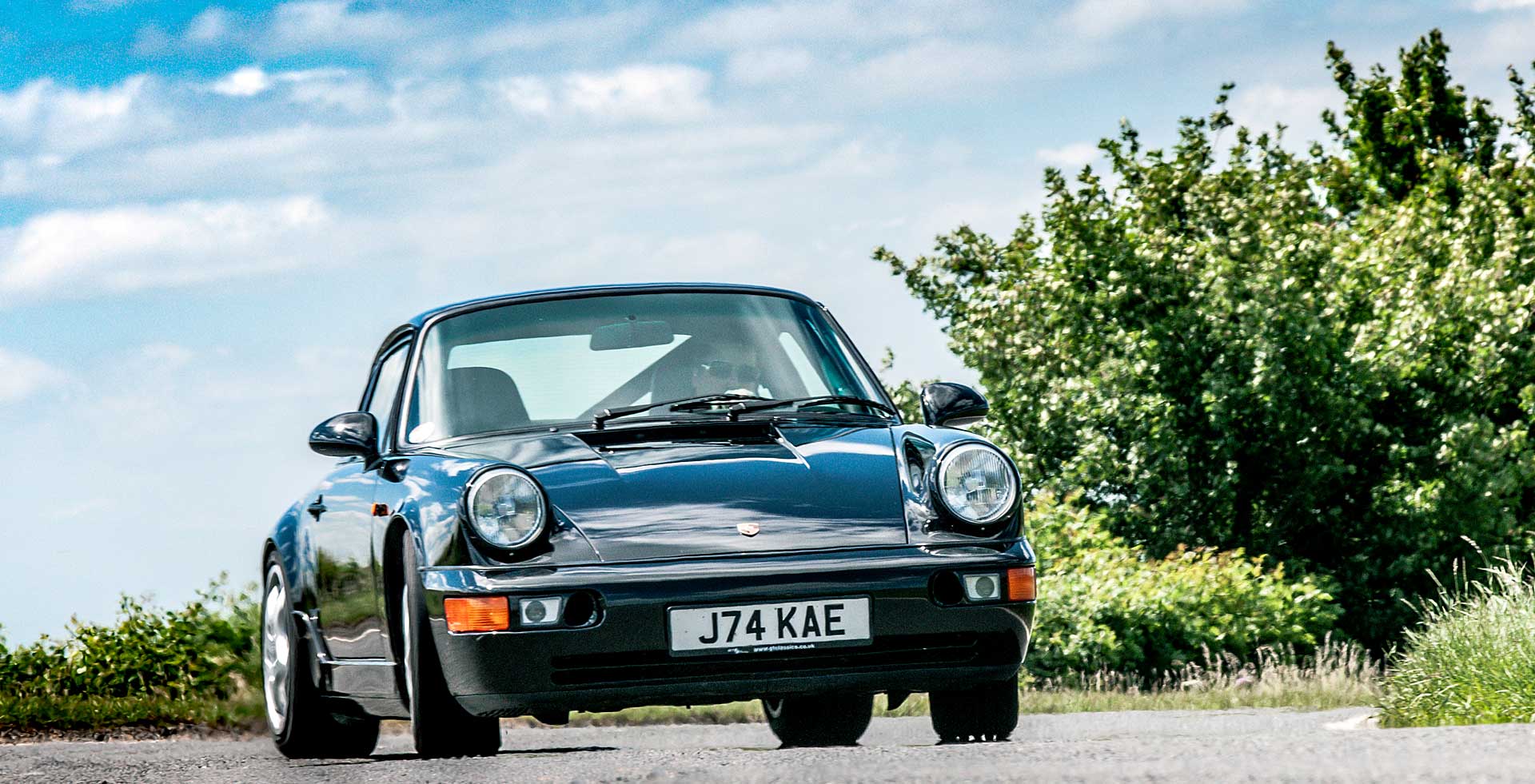 As you might imagine the extended Sports Purpose family has a thing for Porsches and 911s in particular. So when proprietor James Turner suggested I write about my favourite 911 not only did it provide me with the perfect forum to further pump values of the 964 RS (a quest I’ve embraced enthusiastically since buying one in 2006) it also gave me a welcome excuse to reflect on almost three decades of driving Zuffenhausen’s finest export.

My introduction to the 911 was quite a baptism. The year was 1993 and I was a 22 year-old, wet-behind-the-ears road tester dispatched to accompany seasoned motoring journo David Vivian on a twin-test for long defunct motoring title, Carweek. The protagonists? A BMW 850 CSi and a 3.6 964 Turbo. Not just any Turbo either, but Porsche GB’s infamous mint green press car, complete with ‘911 HUL’ registration plate.

Despite best efforts I managed not to crash the Turbo. God knows how, as the roads were patchy wet, ‘Viv’ was (and remains) a bit of a hand and my enthusiasm far outweighed my experience. Detailed impressions of that first drive have largely been lost to the mists of time, though I do recall profusely sweating palms.

Adrenalin rush aside it was the things common to all 911s up to that point in time which left the biggest impression. From the unmistakable clack of the door latch as it releases and the satisfying thunk when you slam the door shut, to the odd floor-hinged pedals, upright windscreen and dinner plate instrument dials. From that day to this these are the quirks and qualities that define a 911 to me.

My exposure to 911s took a welcome upturn a few years later when I joined Performance Car magazine. Porsches seemed a bit more exotic then, I guess because the company only made sports cars. Nevertheless 993s were pleasingly regular visitors to the PCcar park.

These were happy times. None more than the time we got a 993 Carrera 4 and Turbo together with Lord Mexborough’s 959 in North Yorkshire. Suffice to say me being in my mid-twenties, it being the mid-Nineties and my colleagues being John Barker and Brett Fraser, we drove these all-wheel drive 911s at some decidedly un-PC velocities. I think you’d need a helicopter to better my dawn commute from Camberley to Peterborough in the 993 Turbo, while the 959 made the straighter sections of road across the moors feel and sound very much like the Mulsanne. Naughty certainly, but no harm done.

This was the test that really educated me about the 911. How each and every generation moved things on considerably, with the best examples somehow retaining enough of the original DNA to feel connected to its ancestors and different to its contemporary rivals. It also underlined to me that you could only get the best from a 911 if you were able to identify its foibles, master its rearward weight bias and use its behaviour to unlock the car’s full potential.

It’s this process that has always made the 911 unique, and why I still find them endlessly stimulating machines to drive. 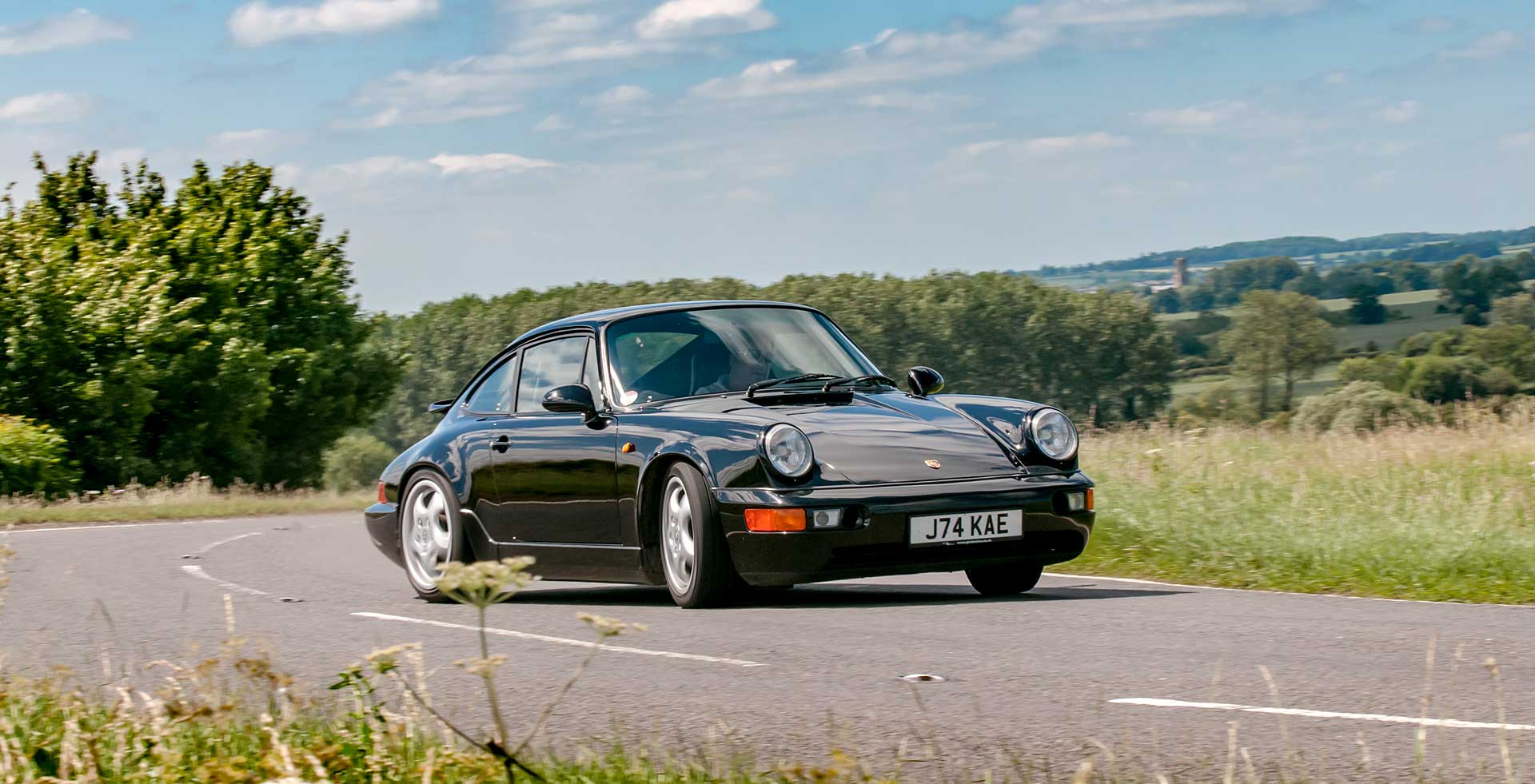 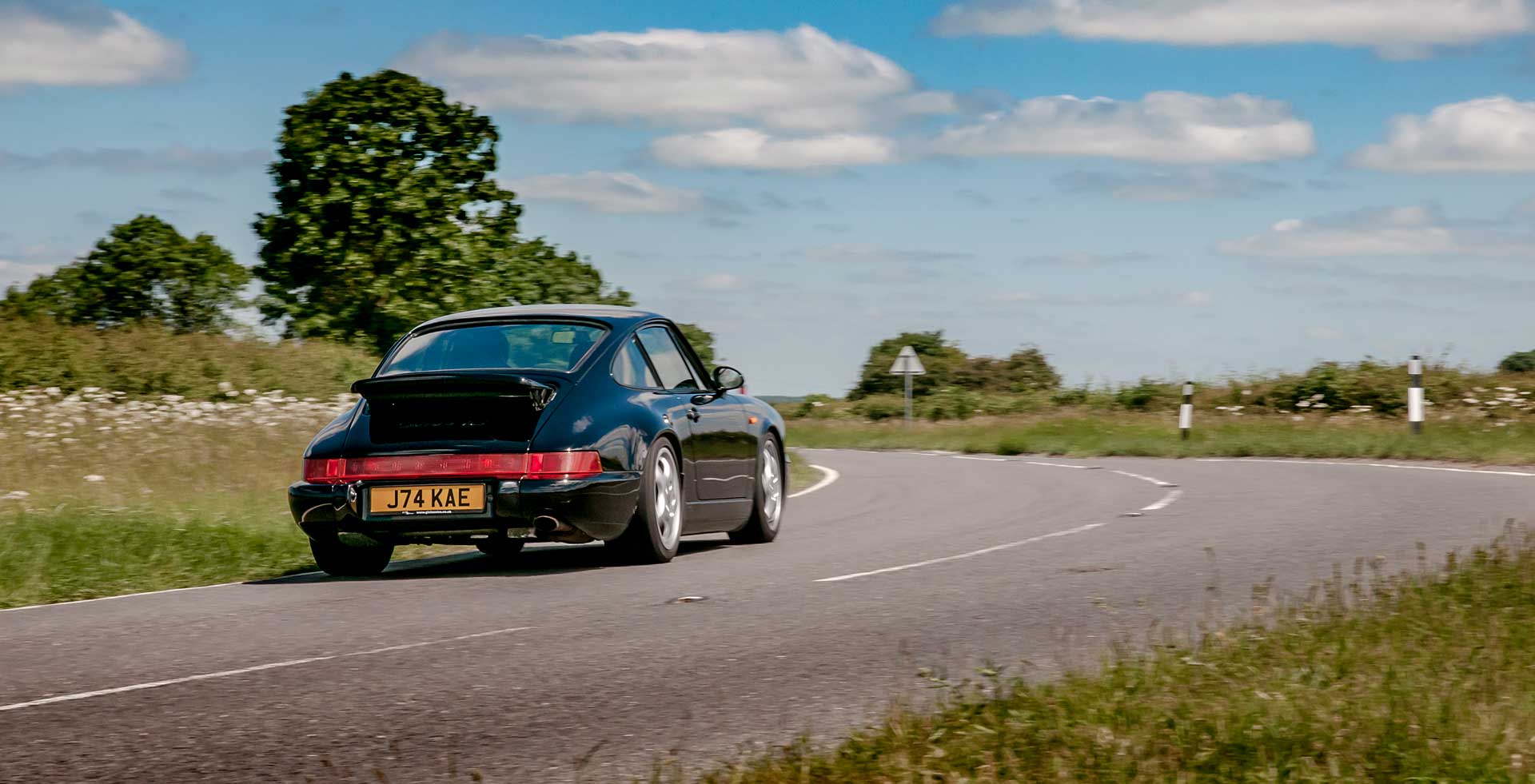 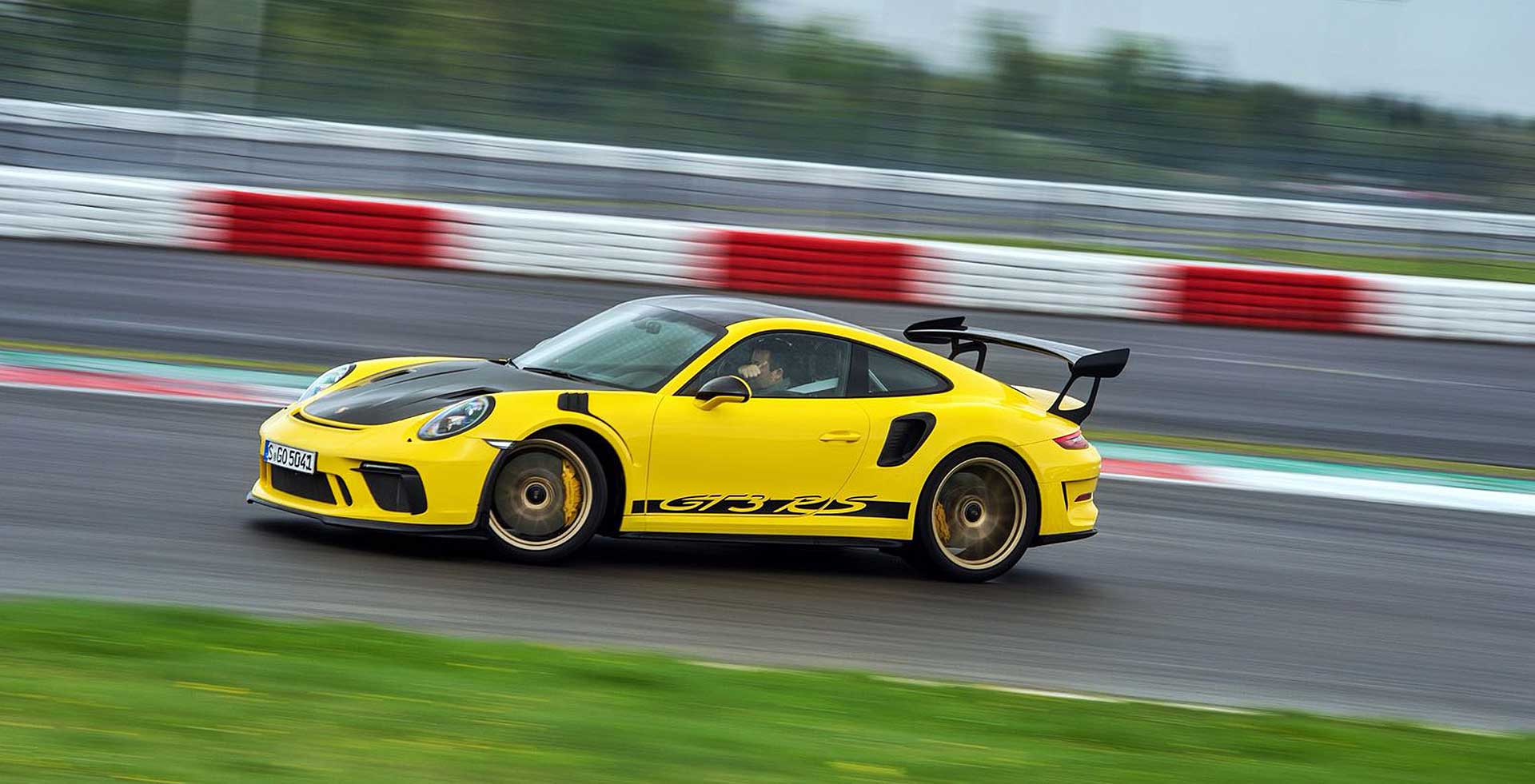 We rated the ’73 RS highest (a verdict I very much agreed with), but I also had something of an epiphany having formed a particularly strong bond with the 964 RS. I headed home from that test knowing that if ever finances allowed I would buy one without hesitation.

Five years later, and without driving one in the intervening period, that moment arrived when I was browsing Porsche specialist Paul McLean’s GT Classics website. The car in question was a lovely Basalt black left-hand drive Lightweight. It had done a few miles, but was straight and honest with original panels and paint, one previous owner in the UK and two in Germany. Asking price? Don’t hate me for this, but it was £30,995.

It’s coming up on 14 years since I bought J74 KAE, or ‘The Unicorn’ as it fondly referred to mates, who give me constant stick for not driving it enough. They may have a point (though it has now done a little over 100,000km), but with every passing year I seem to love it more. There’s something special about it being the last generation to feature that classic 911 profile, while the low ride height and beautiful 17in magnesium Cup rims give it a hard as nails look. The stance and shape are absolutely spot-on, at least to my eye.

Read period road tests of the 964 RS and they tend to fixate on its stiff ride, which led many to regard it as pretty much useless as a road car. In the context of other sports cars of the period I can see why it didn’t have the warmest reception, especially when you consider trackdays weren’t really a thing in 1992. Yet as fast road cars got increasingly aggressive suspension set-ups the 964 came into its own.

Don’t get me wrong, there are times when the front-end will get very lively over awkwardly spaced bumps and force you to temper your speed, but if you enjoy the discipline of having to read the road ahead rather than smashing down it willy-nilly then you’ll appreciate why the 964 connects you so much more intimately with the process of driving it.

It’s this connection coupled with a sense of compactness that sets the 964 apart. It really is a tiny car compared to a 992, and significantly smaller than even a 997. As a result it’s much more wieldy on windy A and B roads. The 3.6-litre motor doesn’t have a hunger for revs like the early, smaller capacity air-cooled models, and certainly not the wild 9000rpm range of a 991 GT3 RS (my favourite of the recent models), but it’s smooth and sounds gruff, with a lovely bellow at higher revs and wide throttle openings. The blueprinted motor has instant response and plenty of torque, so it always feels much more potent than the stated 260bhp would have you expect.

Plenty of 964 RSs have had brake and suspension upgrades, largely because for a while they were used as cheap trackday cars. I’ve never been tempted to change mine from standard because I’ve always been drawn to the authentic 964 RS experience, warts and all.

Right from that first time I drove one I felt it sat right in the sweet spot of being old-school enough to be a classic, yet stopped, went, gripped and shifted gears well enough to feel rooted in the modern age. That blend only gets more appealing as the years pass. Until this changes the 964 RS will always be my favourite 911.