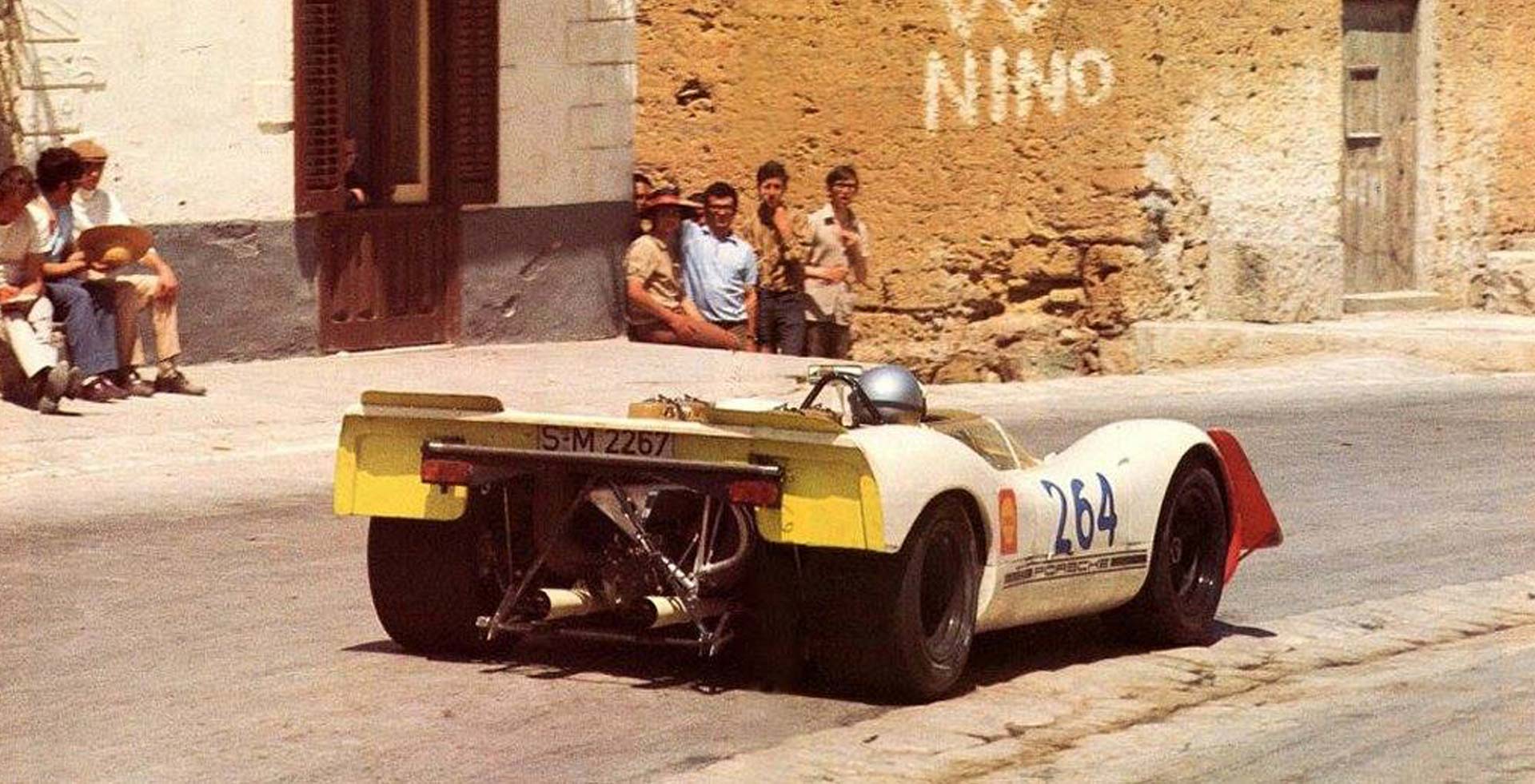 I think we can all agree 2020 has been a year we’d all like to erase from our memories. Likewise Covid and all that has come with it. The promise of an effective vaccine is currently offering us a glimmer of hope, but until then we need a means of escape. Fortunately, I have the answer: a time machine.

As lockdown projects go this was an ambitious one, but after many months in the garden shed I’m pleased to say the device is built and has completed a limited test programme. Having taken the executive decision to ignore travelling into the future - who wants to drive around in electric cars anyway? - the machine can only travel back in time. Specifically to pivotal moments in Porsche’s motorsport history.

Admit it. You’re curious, aren’t you? Just tap-in the date and the place and it’ll whisk you to that moment in space and time quicker than a 917-30 on full-boost. The downside is my Public Liability Insurance cover limits users to one trip (if you think jet lag is bad...), but if you pay for the Gold upgrade package I’ll nip back ahead of you and arrange a Porsche press car of the period to drive while you’re there.

Sounds good, huh? But where and when would you aim for? With so much choice it’s hard to focus on one moment above all others. Having given it considerable thought I steadily whittled it down to the following shortlist: Nürburgring to witness the 911R’s victory in the 84-hour Marathon de la Route; the Alpes Maritime to watch Vic Elford slides his 911T to victory in the ’68 Monte Carlo Rally; a wet weekend in France to cheer Hans Herrmann and Richard Attwood to the 917’s 1970 Le Mans win; a hot weekend at Road America watching ’72 Can-Am champion George Follmer battle mighty McLarens, privateer Porsches, out-there Shadows and even the NART Ferrari 712M in his Penske 917/10 to win from 13th on the grid.

And then I remembered the Targa Florio. As if it wasn’t proving hard enough choosing just one trip back in time, I’d forgotten to include arguably the greatest road race of them all on my list. Shame on me.

So, Sicily it is. But which year? Back in 1999 I visited the island for the very first time, driving a then-new Gen 1 996 GT3 for an Evomagazine feature to recount the 911’s giant-slaying outright win in 1973. To head back there to witness that famous edition of the Targa would be a mind-blowing squaring of the circle, but my chosen time travelling companion - Sports Purpose’s James Turner - ‘helpfully’ throws in a curveball by suggesting the 1969 race as a preferable alternative.

As ever JT provides shrewd counsel, for by swerving the ’73 Targa -  which Martini 911 RSR win aside was actually something of a damp squib due to the early demise of the big Ferrari and Alfa prototypes - he opens up the opportunity to see Porsche System Engineering Ltd’s factory squad operating at the height of its powers, with a 1-2-3-4 finish for the 908/02 following Vic Elford’s virtuoso drive to victory in ’68. 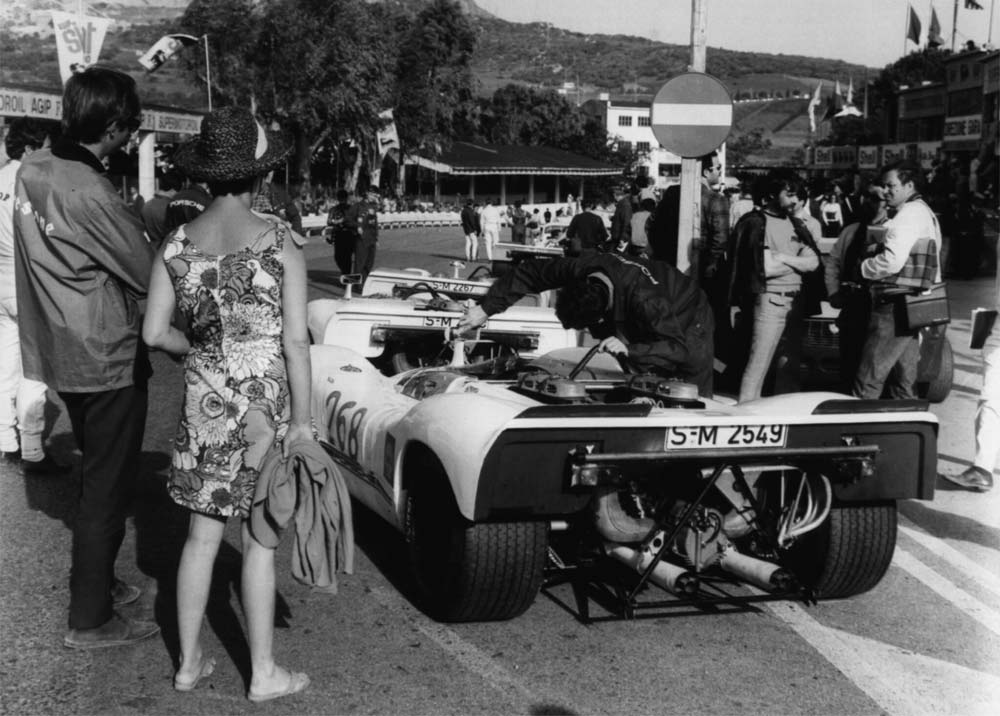 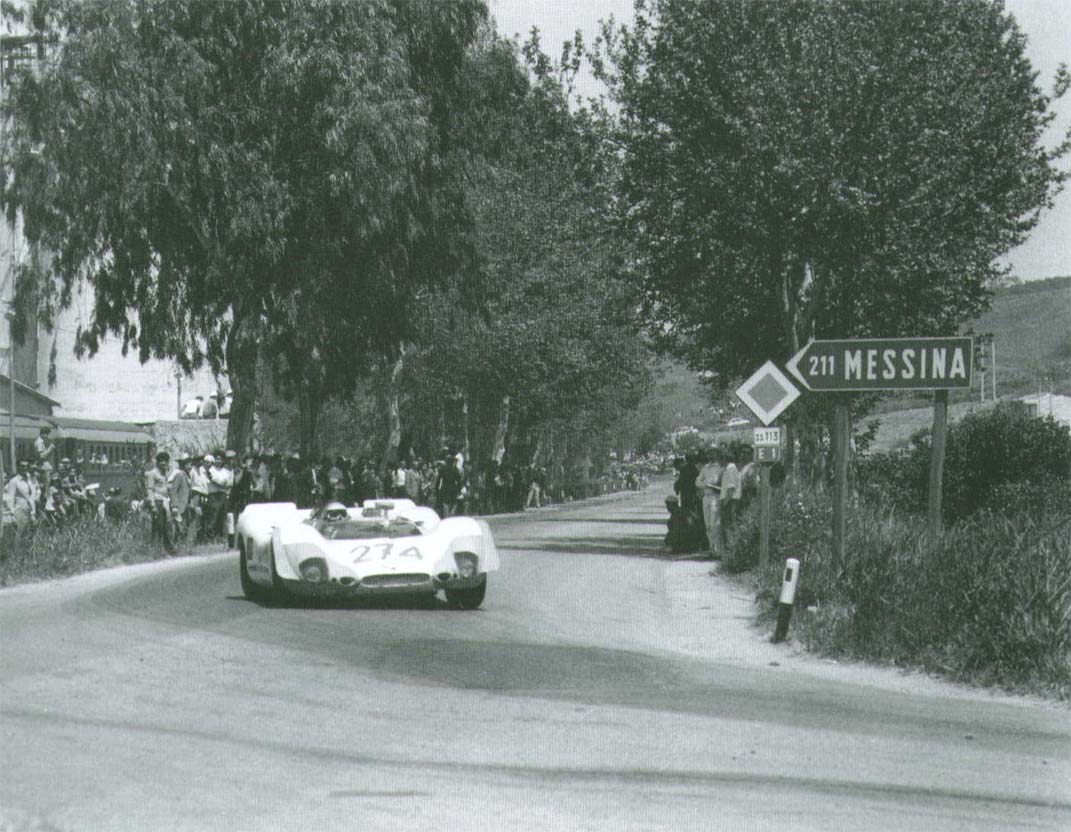 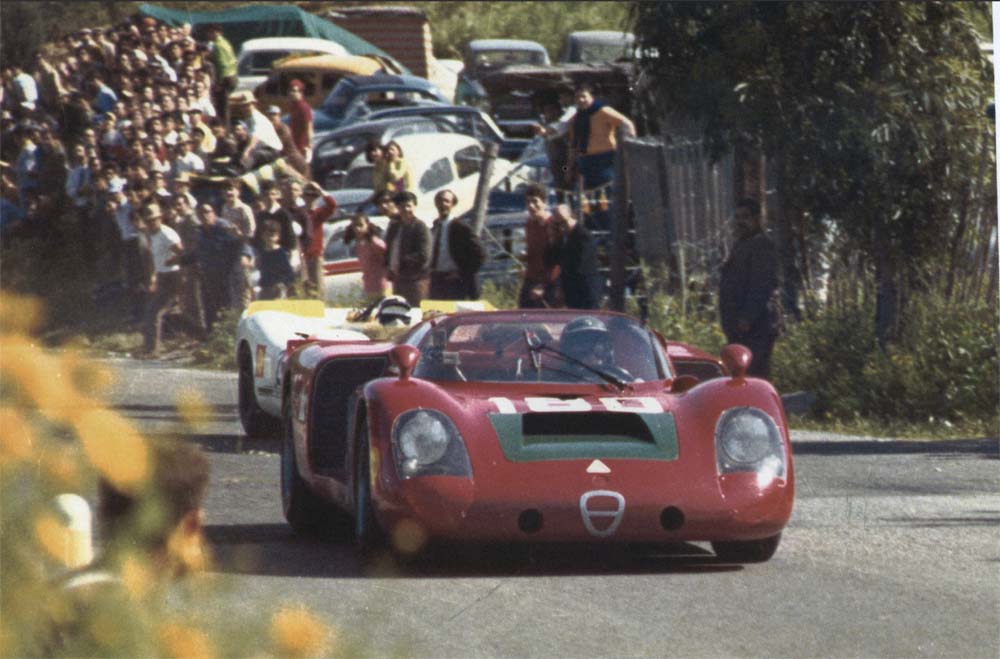 Being a hopeless romantic I also see this as an opportunity to precariously park our car (a recently introduced ‘hard window’ 911 Targa blagged by yours truly from Porsche’s press office, natch) at the edge of the road somewhere in the craggy outskirts of Caltavuturo and  soak-up the sunshine on a Sicilian mountainside. There, drinking wine and eating cold meats, cheese and ciabatta with locals, we join the 700,000 or so spectators who line the 45-mile course religiously each May. Vantage point secured and delicious vittles snaffled, we sit back and revel in the spectacle...

Sadly, Lockheed Meaden Corporation’s garden shed skunkworks hasn’t really built a lockdown time machine. More’s the pity. But there is a way (of sorts) to transport yourself to that late-60s Sicilian scene. And that is to read Denis Jenkinson’s race report, which he wrote for Motor Sportmagazine. Just Google ‘1969 Targa Florio’ and it’s the third link on the list. If this quote doesn’t have you hooked, both on Jenks’ writing and the Targa then, frankly, you’re looking at the wrong website:

“I opted to watch the race from Collesano, the first village on the descent from the half-way point at the Polizzi fork. It was another blazing hot day, even at 8 a.m., as we waited in the forecourt of the Agip petrol station at the end of the village, on a sharp left-hand bend. The start should have been at 8 a.m., which meant the first car would be at Collesano about 8.30 a.m., and at 8.25 a.m. everyone was tense and ready for the first sound of a racing engine in the surrounding mountains. At 8.35 a.m. there was a feeling of anxiety until someone produced a portable radio and we heard that the start had been delayed until 8.25 a.m. and that Vaccarella had been first away. Everything was very peaceful until 8.53 a.m. when we heard an eight-cylinder Porsche charging down the mountain-side, heading for the village. The engine note rose and fell as the car negotiated the sharp bends into the village, and the police waved everyone back from the edge of the road. At 8.54 a.m. a Porsche Spyder with blue recognition marks on the nose burst into view from the main street and came through the left-right-left swerves towards the filling station at an alarming rate. It was Elford, and he took “our” left-hand bend in a full-opposite-lock power slide and was gone...” 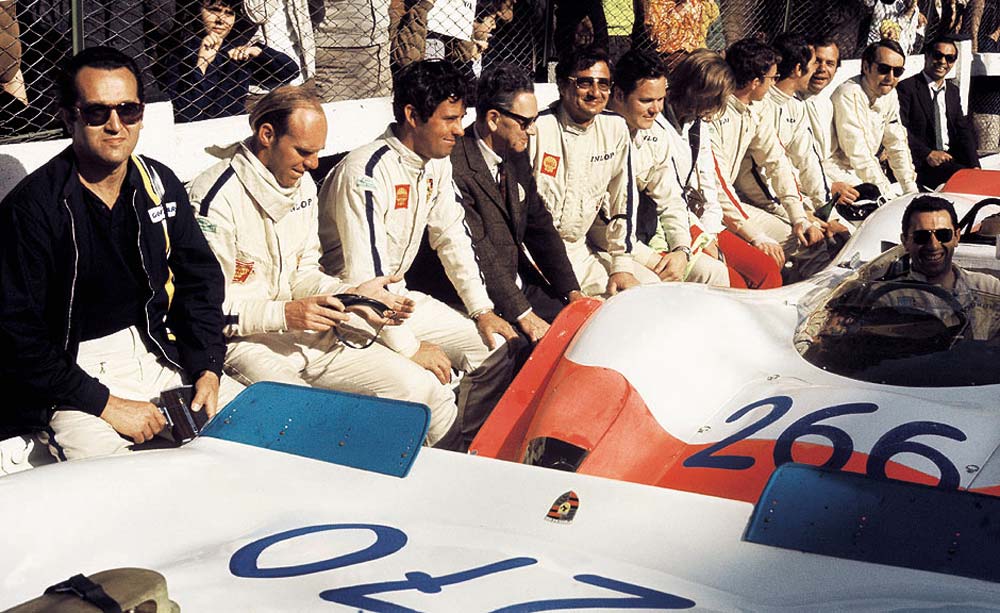 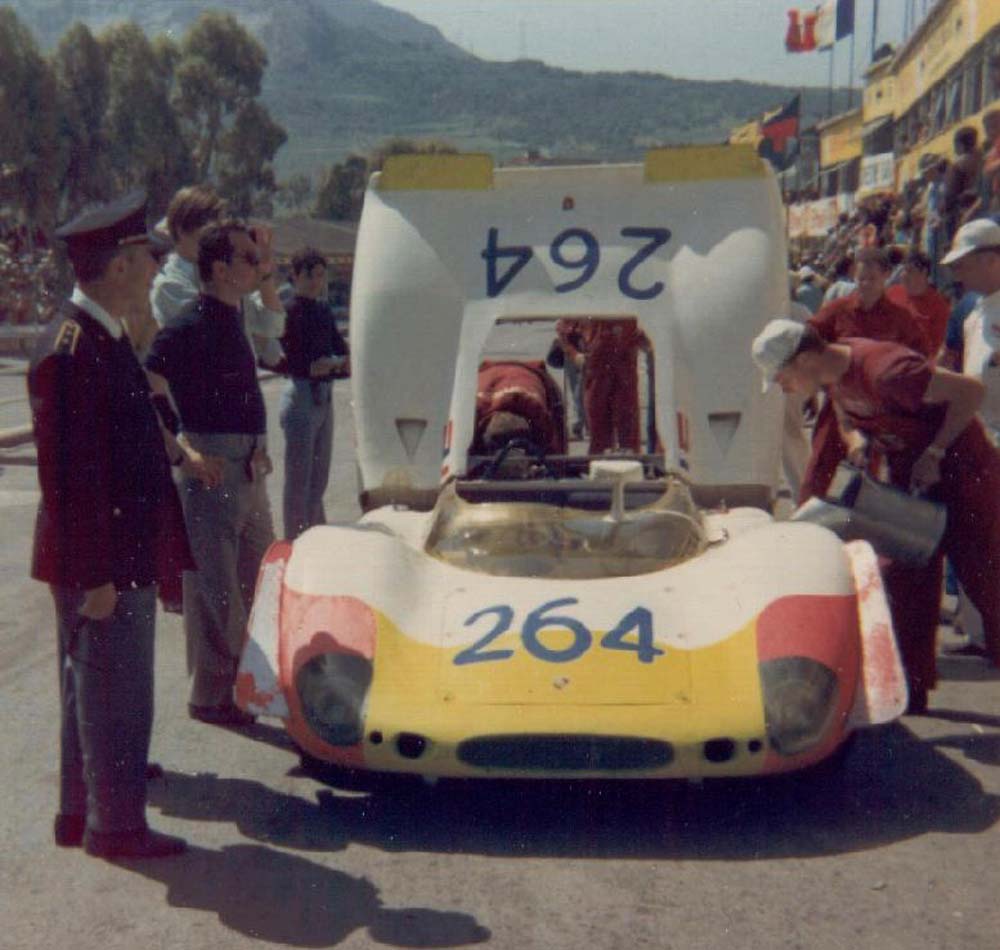 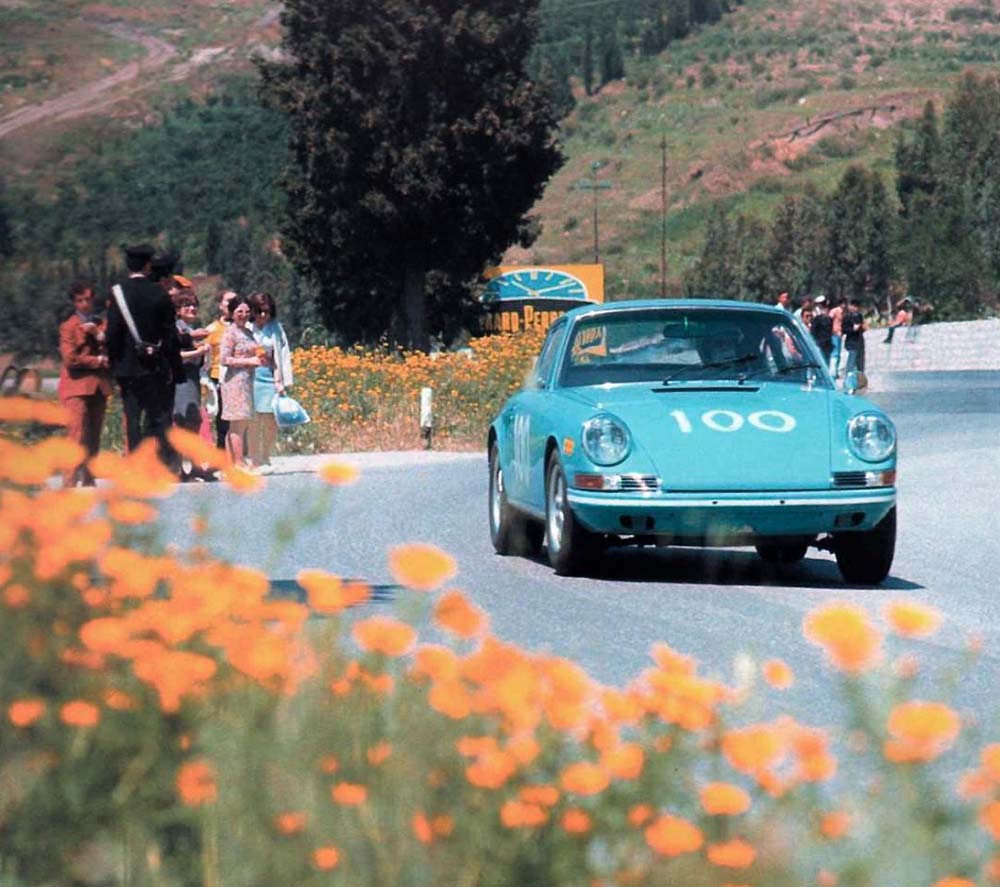 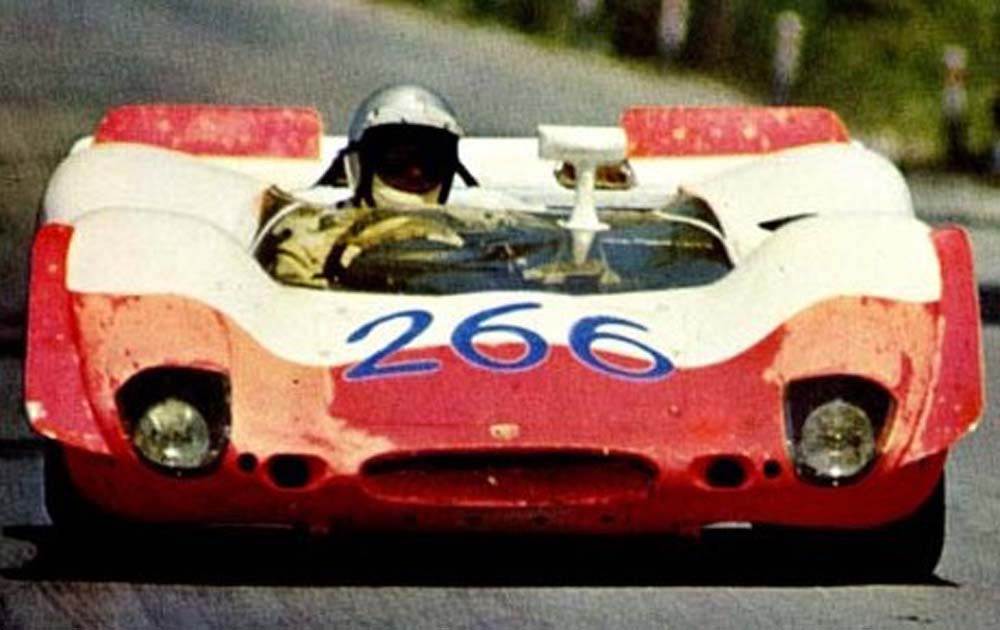