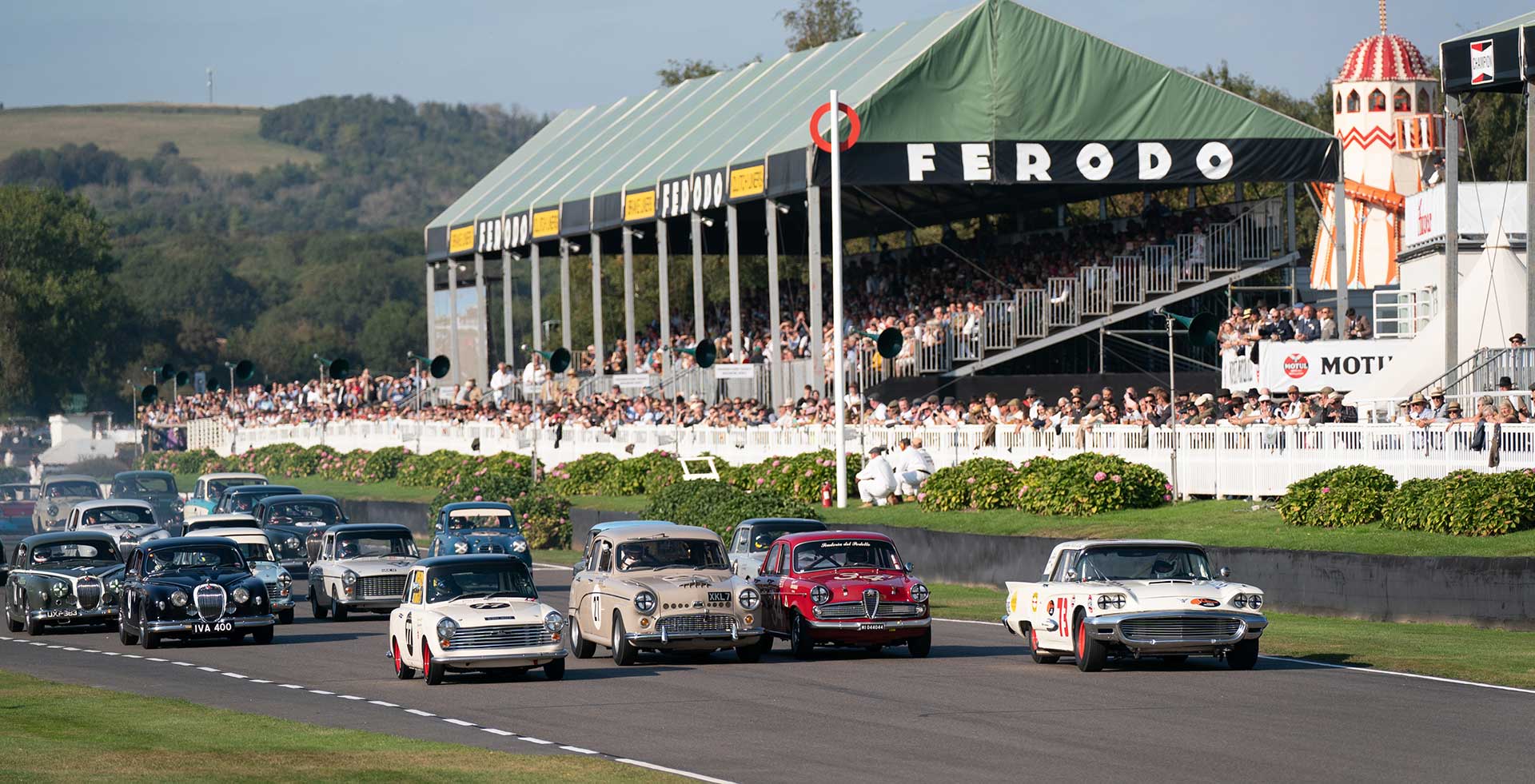 Of the weekend’s packed bill of races I was fortunate to be involved in two - the madcap Mini-only Whitmore Trophy and the ever-popular St Mary’s Trophy. Both were tremendous fun (we shall return to the topic of just how good a historic Mini Cooper S is to drive in a future column), but the St Mary’s is one that’s especially close to my heart.

The secret to this most ‘Goodwood’ of all the Revival races is rooted in its crowd-pleasing mix of machinery and the inspired two-part aggregate format in which the efforts of guest ‘pro’ drivers and owners (or their nominated deputy) are combined. It also alternates between pre-60 and pre-66 periods, this year being the turn of the Fifties tin tops to do battle.

The frankly bizarre blend of cars is something unique to the St Mary’s, with cars as disparate as a BMW 700 and Ford Thunderbird and with a diverse grid that also sees Mk1 and MkVII Jags slug it out with Austin A35s and 40s, Alfa Giuliettas plus the odd Zodiac, Volvo PV544 and Morris Minor. It’s shouldn’t work, but does so brilliantly.

The secret to its success are rules that have been refined over many years by the Historic Racing Drivers Club (HRDC). As you might imagine when you have a grid topped by a 7.0-litre 1700kg Thunderbird and tailed (at least in terms of mass cubic capacity) by the diminutive 700cc 600kg BMW it takes considerable skill and knowledge of each car’s strengths and weaknesses to effect rough equivalency.

Using what in modern parlance would be termed Balance of Performance, St Mary’s entrants are given scope for period tweaks and performance enhancements. For instance there are capacity breaks for the smaller-engined cars, while the really heavy metal - such as the Thunderbird - have been allowed the concession to run with disc brakes as opposed to the drums it would have used in period. The net result is a pair of humdinging races where, at the pointy end at least, the quickest cars are often separated by just tenths of a second.

Thanks to the generosity of its owner, Geoff Gordon, I’ve raced a rather wonderful ’59 Alfa Giulietta Ti in the last three pre-60s St Mary’s. Affectionately nicknamed the Red Rocket, this fabulous little car is far more fierce than its cuddly Pixar character looks suggest. Best of all, thanks to the pro-am pairings I get to call five-time Le Mans winner Emanuele Pirro my teammate. 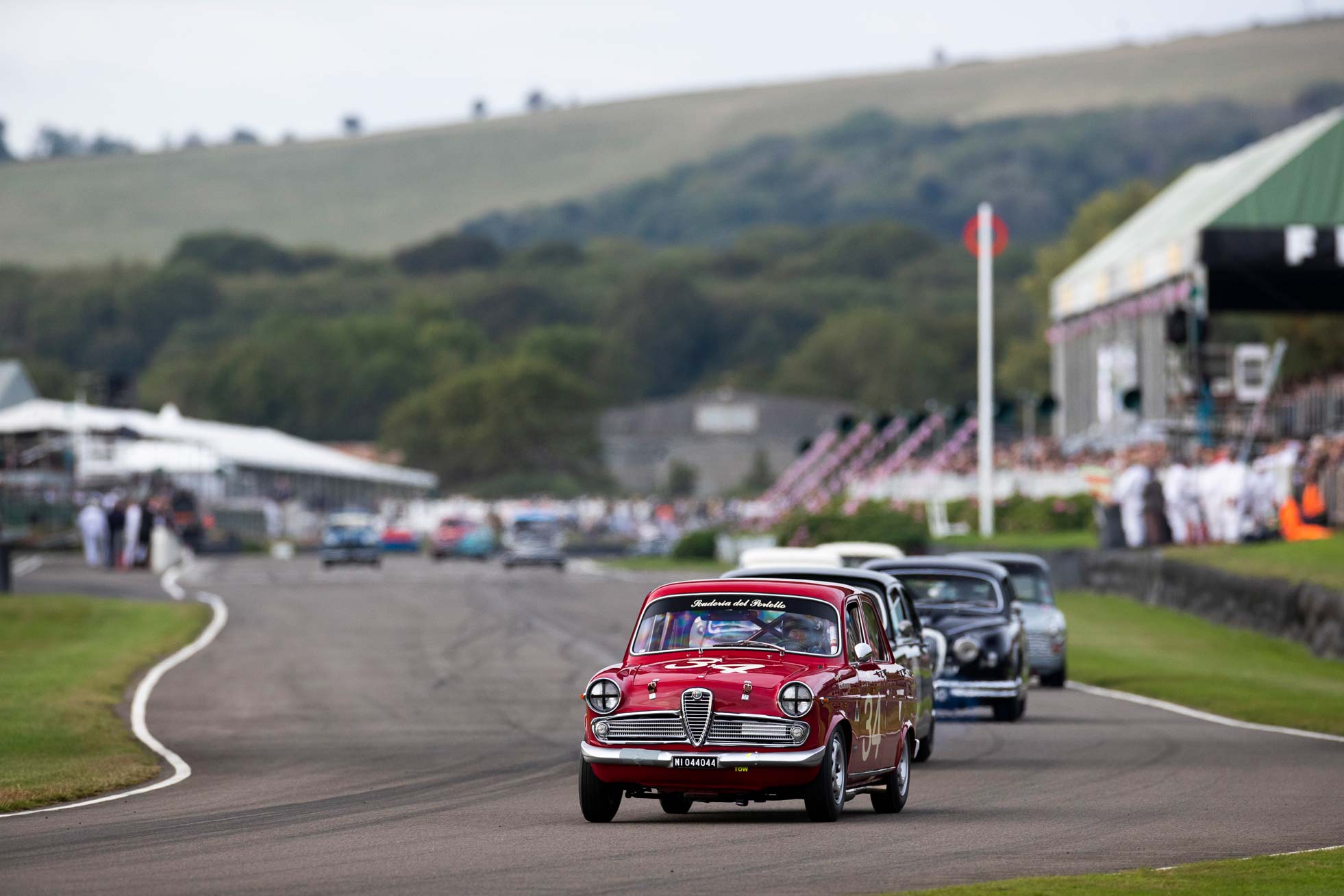 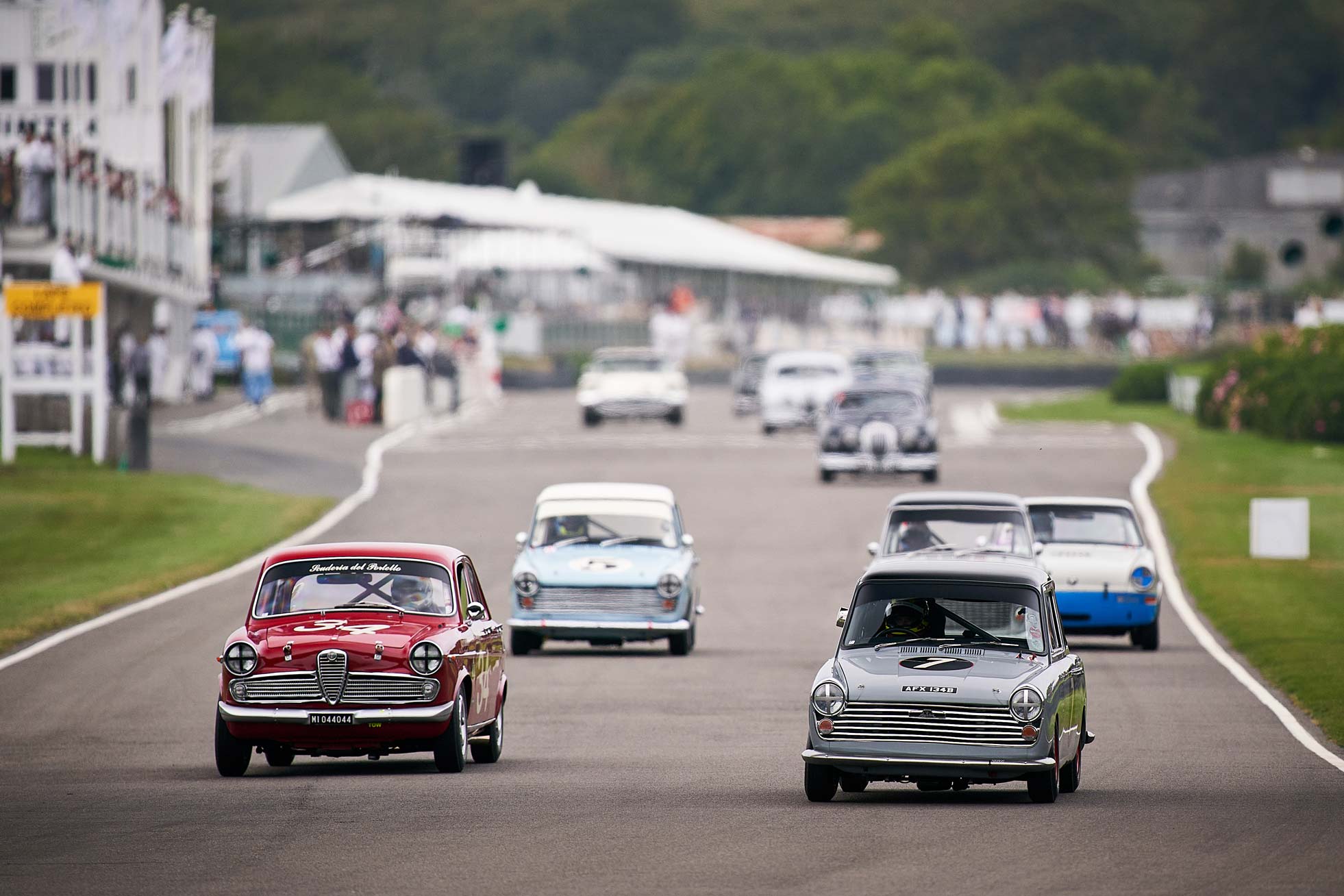 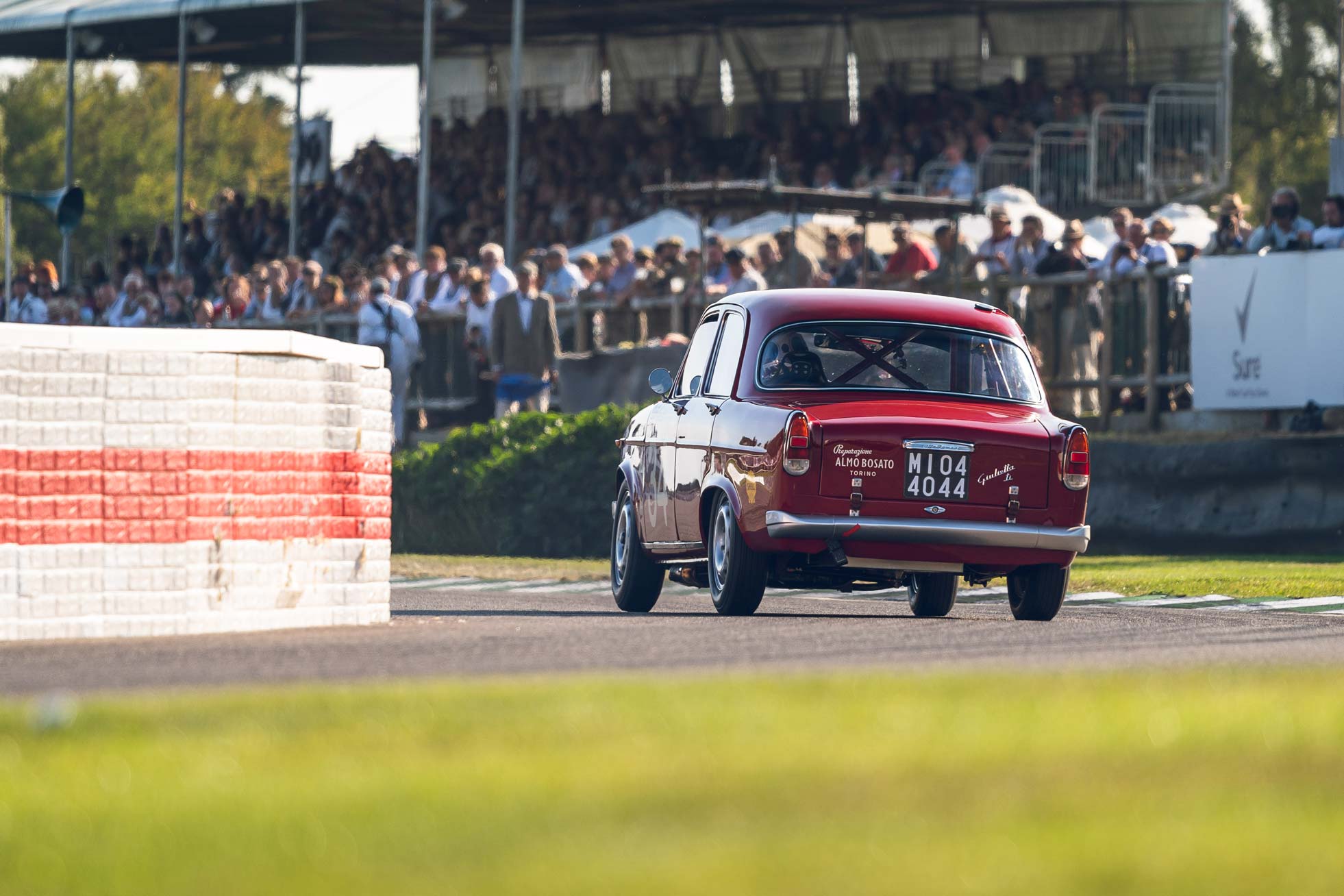 It’s always motivating to be in a truly competitive car, but that feeling is amplified at Goodwood, not least because you’d have to race at the British Grand Prix to drive in front of a larger or more engaged crowd. It’s a real buzz. And that’s before you immerse yourself in the driving experience.

I’ll pretty much race anything, but I have a particular fondness for historic saloon and touring cars because they require you to really roll your sleeves up if you’re to get the best from them. The Giulietta is great in this respect, precise enough that you can find those vital few tenths in qualifying (so long as you resist the urge to get too wayward!), but malleable and forgiving enough that you can really throw it around when you’re battling for position.

The trouble, if you can call it such, is if you’re driving one of the smaller four-cylinder engined cars it’s incredibly tough to race against the six and eight-cylinder Jags and Yank tanks. In qualifying there was just 0.7sec separating my 6th place time with that of pole-sitter Matt Manderson in his A40, but off the line its inevitable he - and I - were going to get mugged by the bigger, gruntier cars around us. If not into Madgwick then certainly on the run towards Fordwater.

Where the Jags and big Ford struggle is the super-fast entry to No Name, the perilous slew through St Mary’s and the short dash to Lavant. You can get by if you screw your courage into a tight ball, but all with the knowledge they’ll come barrelling by on the Lavant straight. Naturally this doesn’t stop ambitious attempts to run round the outside at Woodocote or a lunge into the chicane, even though a successful pass is then likely to be reversed during the drag race down the start-finish straight.

It’s demoralising, but it tees-up some epic battles as we tiddlers harass the bigger cars under braking and do our best to dive by into every single corner. Trouble is the in-fighting between the small cars is just as intense, so there’s always a danger we slow one another down and let the big boys off the hook.

Consequently there are moments when you form some unlikely alliances, in my case occasionally calling a temporary truce with Mike Jordan’s A40 to try and keep us in touch with our more powerful adversaries. All the while knowing we’ll resume battling tooth and nail if the race comes back to us. It’s all part of the fun.

The tactics, purity and intensity of the racing is unmatched in my experience. Something that’s facilitated by Goodwood’s unchanged, ultra-quick and unforgiving layout. No circuit suits pre-slicks, pre-aero historic racing better, for uncannily it seems whatever you’re racing - from Mini Cooper to Shelby Cobra - most corners are almost but never quite flat-out.

From turn-in to exit you inhabit a realm where confidence and courage are kings. One where you have to keep your car balanced by continual applications of steering and throttle, often when inches from the rear bumper of the car in front and with another car tight alongside or right up your chuff. It makes my heart race just thinking about it, yet when you’re in those moments you never want it to end.

This year, despite best efforts, the Thunderbird proved unbeatable in the hands of owner Bill Shepherd and guest pro, Romain Dumas. The Giulietta’s grille bears a small T-Bird shaped dent as evidence of just how close we were coming out of the chicane, while the little Alfa twin-cam’s rev counter telltale is a secret I’ll take with me to the grave.

Combined with Signor Pirro’s 4th place finish (just 0.02sec behind Marcel Fassler’s 3rd place A40) in the Part 1 race, my 3rd place in Part 2 (behind Grant Williams and his ‘BUY1’ Jag and the aforementioned Thunderbird) we netted 3rd overall, with plenty of golden memories banked along the way. Racing really doesn’t get much better.